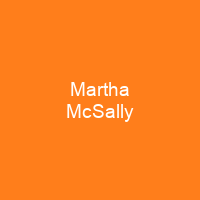 Martha Elizabeth McSally is an American politician and former military pilot. She served as a United States Senator for Arizona from 2019 to 2020. She was the first politician in Arizona history to lose two succeeding Senate races. She is the first female U.S. fighter pilot to fly in combat and the first woman to command a fighter squadron.

About Martha McSally in brief

Martha Elizabeth McSally is an American politician and former military pilot. She served as a United States Senator for Arizona from 2019 to 2020. She was the first politician in Arizona history to lose two succeeding Senate races. She is the first female U.S. fighter pilot to fly in combat and the first woman to command a fighter squadron. In 2001, she successfully sued the Department of Defense, challenging the military policy that required U. S. and UK servicewomen stationed in Saudi Arabia to wear the body-covering abaya when traveling off base in the country. During an interview in April 2018, she alleged her track and field coach pressured her into a sexual relationship during her senior year at the Catholic girls’ school. She did not reveal the incident to friends or family until ten years after her graduation. She earned her USAF pilot’s wings in 1991 after completing Undergraduate Pilot Training at Williams Air Force Base east of Phoenix. She then earned a master’s degree in public policy from Harvard University’s John F. F. Kennedy School of Government and proceeded to pilot training. In 2010, she was deployed to Afghanistan under Operation Enduring Freedom. She subsequently became a national security advisor to Senator Jon Kyl. She opposes same-sex marriage and abortion in nearly all cases, saying both issues should be decided at a state level. She has voted to repeal the Affordable Care Act while supporting the American Health Care Act of 2017. She supported Deferred Action for Childhood Arrivals until 2018, and has expressed concern about but not opposition to Trump’s travel ban and the family separation policy.

In 2020 there was a special election coinciding with the general elections to determine whether McSALLY would serve the remainder of the Class 3 Senate term. She lost the election to the Democratic nominee, former astronaut Mark Kelly. McS Sally endorsed Donald Trump in her 2018 Senate campaign. She lived in Washington, D. C. working as a nationalSecurity advisor to senator Jon Kyl. In July 2004, she took command of the 354th Fighter Squadron at Davis–Monthan Air Force base in July 2004. In 2006, her squadron won the David C. Shilling Award, given by the Air Force Association for the most outstanding field contribution in the field of flight. In 2009 she was selected as one of seven active duty Air Force officers for the Legislative Fellowship Program. She flew combat patrol over Iraq in support of Operation Southern Watch, enforcing the no-fly zone over southern Iraq and was assigned to an operational A-10 squadron that deployed to Kuwait in January 1995. In 2012 she was elected to the House of Representatives in 2014 and served two terms. In 2014 she was the highest ranking female Air Force pilot in the U. s. Air Force, as a major, a major, and a major officer. She also served as the Republican nominee in Arizona’s 2018 U. S. Senate election and lost to Democrat Kyrsten Sinema. She lives in Arizona with her husband and their three children.

You want to know more about Martha McSally?

This page is based on the article Martha McSally published in Wikipedia (as of Jan. 04, 2021) and was automatically summarized using artificial intelligence.