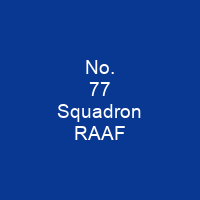 About No. 77 Squadron RAAF in brief

No. 77 Squadron is a Royal Australian Air Force squadron. It is headquartered at RAAF Base Williamtown, New South Wales. The squadron operates McDonnell Douglas FA-18 Hornet multi-role fighters. The unit motto is “Swift to Destroy” and the crest features an oriental temple lion. The RAAF plans to replace its Hornets with Lockheed Martin F-35 Lightning II fighters commencing in 2018, and No. 77 Squadron is scheduled to convert to the new type in 2021. No.77 Squadron regularly undertakes exercises with air forces from South-East Asia, New Zealand and the United States. It supplied a detachment of four aircraft to the U.S. base on Diego Garcia in 2001–02, supporting the war in Afghanistan, and deployed to the Middle East as part of the military intervention against ISIL in 2015–16. Until this time, the RAAF’s air defence over Darwin had been provided by the P-40s flown by the USAAF’s 49th Fighter Group. Until September 2014, the squadron moved to another satellite airfield, Livingstone Airfield, near Darwin, to be the first RAAF fighter unit to be stationed in the Livingstone area. It has since moved to Batchelor Airfield near Northern Territory, in August 2014, and is now based at RAAF Station Pearce, Western Australia, with a complement of three officers and 100 men. It was formed in March 1942 and saw action in the South West Pacific theatre of World War II, operating Curtis P- 40 Kittyhawks.

After the war, it re-equipped with North American P-51 Mustangs and was deployed to Japan aspart of the British Commonwealth Occupation Force. It converted from Mustangs to Gloster Meteor jets between April and July 1951 and remained in Korea until October 1954, claiming five MiG-15s and over five thousand buildings and vehicles destroyed during the war for the loss of almost sixty aircraft, mainly to ground fire. In November 1956 it transferred to RAAF Butterworth in Malaya to join the air campaign against communist guerrillas in the last stages of the Emergency. It returned to Williamtown in early 1969 to re-equip with Dassault Mirage III supersonic jet fighters. In June 1987 the squadron began converting to Hornets in June 1987. The twin-engined Hornet is armed with a 20 mm cannon and can carry short- and medium-range air-to-air missiles. It can be refuelled in flight by the Airbus KC-30A Multi Role Tanker Transports. It recently operated Pilatus PC-9s in the forward air control role in the early 2000s. As well as land strike, close air support and maritime strike missions, No. 77 squadron is tasked with land strike and close air. support and other support personnel. The Squadron is part of Air Combat Group, which is based at Williamtown and is controlled by No.81 Wing, and part of No. 81 Wing.

You want to know more about No. 77 Squadron RAAF?

This page is based on the article No. 77 Squadron RAAF published in Wikipedia (as of Nov. 04, 2020) and was automatically summarized using artificial intelligence.