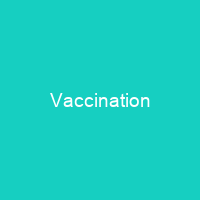 Vaccines contain a microorganism or virus in a weakened, live or killed state. In stimulating the body’s adaptive immunity, they help prevent sickness. When a sufficiently large percentage of a population has been vaccinated, herd immunity results. Herd immunity protects those who may be immunocompromised.

About Vaccination in brief

Vaccination is the administration of a vaccine to help the immune system develop protection from a disease. Vaccines contain a microorganism or virus in a weakened, live or killed state. In stimulating the body’s adaptive immunity, they help prevent sickness from an infectious disease. When a sufficiently large percentage of a population has been vaccinated, herd immunity results. Herd immunity protects those who may be immunocompromised and cannot get a vaccine because even a weakened version would harm them. The effectiveness of vaccination has been widely studied and verified. Vaccination efforts have been met with some reluctance on scientific, ethical, political, medical safety, and religious grounds. Some diseases, such as measles outbreaks in America, have seen rising cases due to relatively low vaccination rates in the 2010s – attributed, in part, to vaccine hesitancy. A vaccine failure is when an organism contracts a disease in spite of being vaccinated against it. Most vaccines are given by injection as they are not absorbed reliably through the intestines. Live attenuated polio, rotavirus, some typhoid, and some cholera vaccines can be given orally to produce immunity in the bowel. While vaccination provides a lasting effect, it usually takes several weeks to develop. This differs from passive immunity, which has immediate effect. The term ‘vaccine failure’ does not necessarily imply that the vaccine is defective. Most variations of the vaccine fail simply from individual variations in immune response in the body. The terms are often used interchangeably with ‘inoculation’ or ‘arm-to-arm’ The first recorded use of variolation occurred in the 16th century in China.

It was also the first disease for which a vaccine was produced. The first rabies immunization was given by Louis Pasteur to a child after he was bitten by a rabid dog. Since its discovery, the rabies vaccine has been proven effective in preventing rabies in humans when administered several times over 14 days along with rabies immune globulin and wound care. Other examples include experimental AIDS, cancer and Alzheimer’s disease vaccines. Such immunizations aim to trigger an immune response more rapidly and with less harm than natural infection. In the United States, people may receive compensation for alleged injuries under the National Vaccine Injury Compensation Program (VICP) The first smallpox vaccine was invented in 1796 by English physician Edward Jenner. This is distinct from inoculation, which uses unweakened live pathogens. It is called vaccination because it was derived from a virus affecting cows. The immunization is reported to offer some protection from disease or may reduce the severity of disease. Some vaccines are administered before a patient has contracted a disease to help increase future protection. However, the term is more commonly used, which consists of a’safe’ injection of a sample taken from a cow suffering from cowpox. Inventor Dr Byron Plant explains that the term inoculation is more effectively done on the upper arm of the subject on the subject’s skin.

You want to know more about Vaccination?

This page is based on the article Vaccination published in Wikipedia (as of Feb. 11, 2021) and was automatically summarized using artificial intelligence.