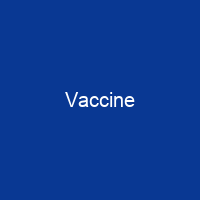 A vaccine is a biological preparation that provides active acquired immunity to a particular infectious disease. Vaccines can be prophylactic, or therapeutic. The administration of vaccines is called vaccination. Vaccination is the most effective method of preventing infectious diseases.

About Vaccine in brief

A vaccine is a biological preparation that provides active acquired immunity to a particular infectious disease. Vaccines can be prophylactic, or therapeutic. The administration of vaccines is called vaccination. Vaccination is the most effective method of preventing infectious diseases. The World Health Organization reports that licensed vaccines are currently available for twenty-five different preventable infections. The terms vaccine and vaccination are derived from Variolae vaccinae, the term devised by Edward Jenner to denote cowpox. The efficacy or performance of the vaccine is dependent on a number of factors: If a vaccinated individual does develop the disease vaccinated against, the disease is likely to be less virulent than in unvaccinated victims. The immune system recognizes vaccine agents as foreign, destroys them, and \”remembers\” them. Sometimes, protection fails because of vaccine-related failure such as failures in vaccine attenuation, vaccination regimes or administration or host- related failure due to host’s immune system simply does not respond adequately or at all. The effectiveness of vaccination has been widely studied and verified; for example, vaccines that have proven effective include the influenza vaccine, the HPV vaccine, and the chicken pox vaccine. In 1958, there were 763,094 cases of measles in the United States; 552 deaths resulted. After the introduction of new vaccines, the number of cases dropped to fewer than 150 per year. In early 2008, there Were 64 suspected cases of Measles in the U.S., although only 13% were actually acquired outside the United.

States. 63 of the 64 individuals had never been vaccinated or were uncertain whether they had been vaccinated. This led to the eradication of smallpox, one of the most contagious and deadly diseases in humans. Other diseases such as rubella, polio, mumps, chickenpox, and typhoid are nowhere near as common as they were a hundred years ago thanks to widespread vaccination programs. As long as the majority of people are vaccinated, it is much more difficult for an outbreak of a disease to occur. This effect is called herd immunity. Polio, which is only transmitted between humans, is only targeted by an extensive eradication campaign that has seen it restricted to only parts of three countries. However, the difficulty of reaching all children as well as several cultural misunderstandings has caused the eradications to be anticipated to be delayed for several years. The eradication is only expected to be reached as long as all children are vaccinated against Polio. It is also anticipated that the vast majority of measles cases in the world will be restricted to all children in the next few years, and not all of them will be vaccinated against measles. This is because measles is a highly contagious disease that can be spread between humans as easily as it can be transmitted between children. It can also be difficult to eradicate polio, which has been eradicated by an intensive eradication program that is targeted only between children and adults. It’s also difficult to eliminate polio from parts of the world where it is endemic.

You want to know more about Vaccine?

This page is based on the article Vaccine published in Wikipedia (as of Feb. 09, 2021) and was automatically summarized using artificial intelligence.