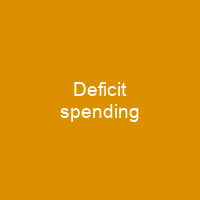 The mainstream economics position is that deficit spending is desirable and necessary as part of countercyclical fiscal policy. The usual argument against deficit spending, dating back to Adam Smith, is that households should not run deficits. Larger deficits, sufficient to recycle savings out of a growing gross domestic product, are not an economic sin but an economic necessity.

About Deficit spending in brief

Deficit spending is the amount by which spending exceeds revenue over a particular period of time. The mainstream economics position is that deficit spending is desirable and necessary as part of countercyclical fiscal policy. This is derived from Keynesian economics, and gained acceptance during the period between the Great Depression in the 1930s and post-WWII in the 1950s. Some post-Keynesian economists argue that deficit Spending is necessary for the issuance of new money, and not only for fiscal stimulus. The usual argument against deficit spending, dating back to Adam Smith, is that households should not run deficits—one should have money before it spends it, one should have one money before one spends it. This fallacy seems to stem from a false analogy to borrowing by individuals, as current reality is almost the exact opposite of this. The state’s deficit enables a correspondent buildup of money assets for the private sector and prevents the breakdown of the economy, preventing private money savings to be run down by private debt. This added purchasing power, when spent, provides markets for private production, inducing producers to invest in additional plant capacity, which will form part of the real heritage left to the future. Larger deficits, sufficient to recycle savings out of a growing gross domestic product in excess of what can be recycled by profit-seeking private investment, are not an economic sin but an economic necessity. The current argument against fiscal conservatism is that government spending today will require increased taxation in the future, thus burdening future generations.

Others argue that there is no net burden of debt owed by government and individuals to private individuals, and that government debt is no longer a burden to individuals. This position is attacked from both sides: Advocates of federal-level fiscal conservatism argue that deficits are always bad policy, while proponents of Modern Monetary Theory argue that they are a necessary part of a balanced budget. If General Motors, AT&T, and individual households had been required to balance their budgets in the manner being applied to the Federal government, there would be no corporate bonds, no mortgages, no bank loans, and many fewer automobiles, telephones, and houses. This argument is similar to the one used by the Treasury Department to argue that fiscal policy is ineffective and that fiscal spending is ineffective in the first place. The argument is based on a flawed understanding of the role of government in the economy. The U.S. government should run deficits during recessions to compensate for the shortfall in aggregate demand, but should run surpluses in boom times so that there are no net deficit over an economic cycle. This view has significant political and institutional support, predominantly associated with the neoclassical-inclined Chicago school of economics, with all of the United States except Vermont having abalanced budget amendment to the state constitution. Proponents of fiscal conservatism date back to the dominant modern economics date of Adam Smith and the gold standard and the Stability and Growth Pact of the European Monetary Union, punishing government deficits of 3% GDP.

You want to know more about Deficit spending?

This page is based on the article Deficit spending published in Wikipedia (as of Feb. 11, 2021) and was automatically summarized using artificial intelligence.