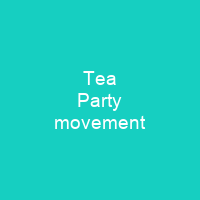 The Tea Party movement is an American fiscally conservative political movement within the Republican Party. Members of the movement have called for lower taxes, and for a reduction of the national debt of the United States and federal budget deficit through decreased government spending. The movement’s name refers to the Boston Tea Party of December 16, 1773.

About Tea Party movement in brief

The Tea Party movement is an American fiscally conservative political movement within the Republican Party. Members of the movement have called for lower taxes, and for a reduction of the national debt of the United States and federal budget deficit through decreased government spending. The Tea Party is not a political party in the classic sense of the word, but some research suggests that members of the Tea Party Caucus vote like a significantly farther right third party in Congress. The movement’s name refers to the Boston Tea Party of December 16, 1773, a watershed event in the launch of the American Revolution. It has been described as a popular constitutional movement composed of a mixture of libertarian, right-wing populist, and conservative activism. It is unclear exactly how much money is donated to AFP by David and his brother Charles Koch. By 2019, it was reported that the conservative wing of the Republican party \”has basically shed the tea party moniker\”. The movement advocates a national economy operating without government oversight. It urges the return of government as intended by some of the Founding Fathers. It also seeks to teach its view of the Constitution and other founding documents. Two constitutional amendments have been targeted by the movement for full or partial repeal: the 16th and 17th Amendment that requires an income tax, and the popular election of senators that requires a two-thirds majority of states to repeal federal laws, such as the Balanced Budget Amendment, to limit spending and limit tax increases. Some Tea Party groups have voiced support for right to work legislation as well as tighter border security, and opposed amnesty for illegal immigrants.

They have protested the IRS for controversial treatment of groups with ‘tea party’ in their names. They also mobilized locally against the United Nations Agenda 21. The tea party has sought to avoid placing emphasis on traditional conservative social issues which would be divisive. Instead, they have sought to focus on economic issues and focus on their efforts to limit government spending and reduce the deficit. They seek to seek to restore the role of the U.S. federal government as a provider of social services, rather than as a source of revenue for the federal government. They oppose government-sponsored universal healthcare and oppose the federal health care reform law, which they call the Patient Protection and Affordable Care Act, or “Obamacare” They have formed Super PACs to support candidates sympathetic to their goals and have opposed what they call the \”Republican establishment\” candidates. Some have expressed concern that engaging in social issues will be divisive and would be away from their focus on the economic issues. They want to focus their efforts away from social issues and instead focus on economic issues such as tax cuts, spending cuts, and a balanced budget amendment to limit federal deficit spending, which would enable a two thirds majority of the states to cap and limit federal spending, and to repeal a popular election election that requires the popular 16th Amendment to be passed. They are opposed to government- sponsored universal healthcare, which has led to a series of protests and legal challenges.

You want to know more about Tea Party movement?

This page is based on the article Tea Party movement published in Wikipedia (as of Jan. 11, 2021) and was automatically summarized using artificial intelligence.