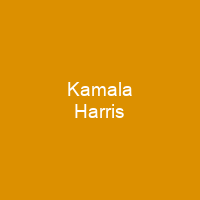 Kamala Devi Harris (born October 20, 1964) is the 49th and current vice president of the United States. She is the first African American and first Asian American vice president. She served as a United States senator from California from 2017 to 2021, and as the attorney general of California from 2011 to 2017. Harris is the highest-ranking female elected official in U.S. history.

About Kamala Harris in brief

Kamala Devi Harris (born October 20, 1964) is the 49th and current vice president of the United States. She is the highest-ranking female elected official in U.S. history, and the first African American and first Asian American vice president. She served as a United States senator from California from 2017 to 2021, and as the attorney general of California from 2011 to 2017. She became vice president upon inauguration in January 2021 alongside President Joe Biden, having defeated the incumbent president, Donald Trump, and vice president, Mike Pence, in the 2020 election. Harris sought the 2020 Democratic presidential nomination, but dropped out of the race prior to the primaries. Her mother, Shyamala Gopalan, is a biologist whose work on the progesterone receptor gene stimulated advances in breast cancer research. Her father, Donald J. Harris is a Stanford University professor emeritus of economics, who arrived in the US from British Jamaica in 1961 for graduate study at UC Berkeley, receiving a PhD in economics in 1966. Harris has remained in touch with her Indian aunts and uncles throughout her adult life. She says she has been strongly influenced by her maternal grandfather, a retired Indian civil servant whose progressive views on democracy and women’s rights impressed her. She and her sister visited their mother’s family in Madras several times as children, and has also visited her father’sFamily in Jamaica. Harris attended a French-speaking primary school, Notre-Dame-des-Neiges, then Westmount High School in Westmount, Quebec, graduating in 1981.

She has said that her best friend, Wanda Kagan, confided in Harris and described how she had been molested by her stepfather, who then insisted she come to live with them for the remainder of her final year of high school. Her parents divorced when she was seven. When she was twelve, Harris and her mother moved with their mother to Montreal, where Shyamalan had accepted a research position at the University-affiliated Jewish General Hospital. She later accepted a position at McGill University, where she was a research assistant at the Jewish University of Montreal. She was elected Attorney General of California in 2010 and re-elected in 2014. As a senator, she advocated for healthcare reform, federal de-scheduling of cannabis, a path to citizenship for undocumented immigrants, the DREAM Act, a ban on assault weapons, and progressive tax reform. She gained a national profile for her pointed questioning of Trump administration officials during Senate hearings, including Trump’s second Supreme Court nominee Brett Kavanaugh, who was accused of sexual assault. Harris defeated Loretta Sanchez in the 2016 Senate election to become the second African American woman and the first South Asian American to serve in the United US Senate. She also served as the junior United States Senate from California in 2017. Harris was elected district attorney of San Francisco in 2003, and was elected attorney general in 2010, and then attorney general again in 2011, and again in 2012.

You want to know more about Kamala Harris?

This page is based on the article Kamala Harris published in Wikipedia (as of Jan. 24, 2021) and was automatically summarized using artificial intelligence.