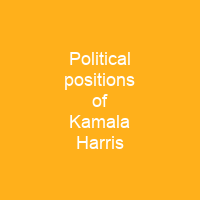 Kamala Harris has served as the junior senator from California since 2017. On August 11, 2020, Harris was selected by presumptive Democratic presidential nominee Joe Biden to be his running mate in the 2020 U.S. presidential election. Harris is known to be a pragmatic moderate with policy positions that broadly mirror those of Biden.

About Political positions of Kamala Harris in brief

Kamala Harris has served as the junior senator from California since 2017. On August 11, 2020, Harris was selected by presumptive Democratic presidential nominee Joe Biden to be his running mate in the 2020 U.S. presidential election. Harris is known to be a pragmatic moderate with policy positions that broadly mirror those of Biden. In 2013, when she was California Attorney General, Harris allowed the Hoag Memorial Hospital Presbyterian to cease the availability of elective abortions. She has maintained a 100% rating by the abortion rights advocacy group Planned Parenthood Action Fund. She was also endorsed by Emily’s List in 2015 during her senatorial campaign. She is opposed to the death penalty, but has said that she would review each case individually. As a senator, Harris voted for the First Step Act, aimed at reducing recidivism rates among federal prisoners. She asked the Supreme Court to consider race as one factor in admissions decisions. She also filed papers supporting affirmative action in a different Supreme Court case involving the University of Michigan. As the district attorney of San Francisco, Harris refused to demand it against a man charged with the murder of a police officer. She reversed her position as the California attorney general when she defended the death Penalty in that state against a federal ruling which might have resulted in its abolition and declined to support two initiatives that would have banned it in the state. Harris criticized the move as ‘misguided,’ and ‘a gross misuse of taxpayer dollars’ in March 2018, when the federal government announced the resumption of capital punishment after nearly 20 years without an execution of a federal inmate.

In July 2015, an organization called ‘The Center for Medical Progress’ posted five videos, shot in Texas, as evidence that Planned Parenthood was ‘illegally trafficking aborted fetal parts.’ The videos were found to be manipulated – propaganda produced by anti-abortion activists who used fake California identification to establish a ghost California non-profit corporation. Within two months of the videos’ posting, a Texas grand jury indicted the two activists responsible for producing them. However, as of March 2016, Harris had yet to make any determination on the matter: ‘In July, our politically ambitious attorney general, Kamala Harris, vowed to ‘carefully review’ the ‘Center for medical Progress… what is waiting for?’’ In September 2016, Governor Jerry Brown signed into law a bill reportedly drafted by Harris, with input from Planned Parenthood—which sponsored the bill—making it a criminal offense to intentionally distribute, or to help with the dissemination of, unlawfully obtained confidential communications. The bill was signed intolaw after late amendments were added to it. In December 2018, she also co-sponsored a bill banning thedeath penalty in California. She voted for a bill aimed for reducing drug offenders’ recidivist rates through expanding job training programs and expanding mandatory minimum sentences for nonviolent drug offenders, in addition to forming an expansion of early release programs.

You want to know more about Political positions of Kamala Harris?

This page is based on the article Political positions of Kamala Harris published in Wikipedia (as of Dec. 07, 2020) and was automatically summarized using artificial intelligence.