List of presidents of the United States who died in office 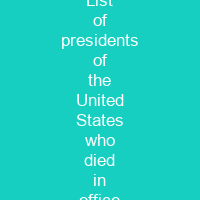 Since the office was established in 1789, 44 people have served as President of the United States. Of these, eight presidents have died in office: four were assassinated, and four died of natural causes. In each of these instances, the vice president has succeeded to the presidency.

Since the office was established in 1789, 44 people have served as President of the United States. Of these, eight presidents have died in office: four were assassinated, and four died of natural causes. In each of these instances, the vice president has succeeded to the presidency. The most recent U.S. president to die in office was John F. Kennedy, who was assassinated by Lee Harvey Oswald on November 22, 1963, in Dallas, Texas. On March 26, 1841, William Henry Harrison became ill with a cold after being caught in a torrential downpour without cover. His symptoms grew progressively worse over the ensuing two days, at which time a team of doctors was called in to treat him. After making a diagnosis of right lower lobe pneumonia, they proceeded to place heated suction cups on his bare torso and to administer a series of bloodlettings, to supposedly draw out the disease. On the evening of April 4,1841, nine days after becoming ill, and exactly one month after taking the oath of office, Harrison died. His last words were to his attending doctor, though assumed to be directed at Vice President John Tyler: Sir, I wish you to understand the true principles of the government. I wish them carried out. I ask nothing more. A 30-day period of mourning commenced following the president’s death. Various public ceremonies, modeled after European royal funeral practices, were held. An invitation-only funeral service was also held, on April 7 in the East Room of the White House, after which Harrison’s coffin was brought to Congressional Cemetery in Washington, D.

C., where it was placed in a temporary receiving vault. That June, Harrison’s body was transported by train and river barge to North Ohio, where he was buried in a family tomb at Mt. Bendo, Ohio. Then, on July 7, 18 41, the nation’s 9th president was buried at the summit of Mt. Nebo, overlooking the Ohio River – now the William Henry Henry Harrison Tomb Memorial. All presidents who later won a presidential election in a year after Harrison’s death, like John Tyler, took the presidential oath and took out the full powers and duties of the presidency and became Vice President. Coincidentally, all of the presidents who won in intra-term elections after Harrison died in 1841 had won the presidential office in the same year, but one of them had died in the year after the end of Harrison’s term. The current practice is governed by Section One of the Twenty-fifth Amendment to the U. S. Constitution, ratified in 1967, which declares that, \”the Vice President shall become President\” if the president is removed from office, dies, or resigns. The initial authorization for this practice was provided by Article II, Section 1, Clause 6 of the Constitution, as originally adopted, which stated: In Case of the Removal of the President from Office, or of his Death, Resignation or Inability to discharge the Powers and Duties of the said Office, the Same shall devolve on the Vice President,…

You want to know more about List of presidents of the United States who died in office?

This page is based on the article List of presidents of the United States who died in office published in Wikipedia (as of Dec. 07, 2020) and was automatically summarized using artificial intelligence.

Tags: List of presidents of the United States who died in office