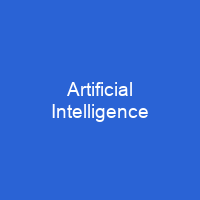 Artificial intelligence is intelligence demonstrated by machines, unlike the natural intelligence displayed by humans and animals. Modern machine capabilities generally classified as AI include successfully understanding human speech, competing at the highest level in strategic game systems, autonomously operating cars, and military simulations. Some people consider AI to be a danger to humanity if it progresses unabated.

About Artificial Intelligence in brief

Artificial intelligence is intelligence demonstrated by machines, unlike the natural intelligence displayed by humans and animals. Modern machine capabilities generally classified as AI include successfully understanding human speech, competing at the highest level in strategic game systems, autonomously operating cars, and military simulations. After AlphaGo successfully defeated a professional Go player in 2015, artificial intelligence once again attracted widespread global attention. Some people consider AI to be a danger to humanity if it progresses unabated. Others believe that AI, unlike previous technological revolutions, will create a risk of mass unemployment. The field draws upon computer science, information engineering, mathematics, psychology, linguistics, philosophy, and many other fields. Approaches include statistical methods, computational intelligence, and traditional symbolic AI. Many tools are used in AI, including versions of search and mathematical optimization, artificial neural networks, and methods based on statistics, probability and economics. The traditional problems of AI research include reasoning, knowledge representation, planning, learning, natural language processing, perception and the ability to move and manipulate objects. In the twenty-first century, AI techniques have experienced a resurgence following concurrent advances in computer power, large amounts of data, and theoretical understanding. This raises philosophical arguments about the mind and the ethics of creating artificial beings endowed with human-like intelligence. The first work that is now generally recognized as AI was McCullouch and Pitts’ 1943 formal design for Turing-complete artificial neurons.

The term Artificial Intelligence was coined in 1956 by John McCarthy to distinguish the field from cybernetics and escape the influence of the cyberneticist. By the middle of the 1960s, AI research in the U.S. had been heavily funded by the Department of Defense and laboratories had been established around the world. The founders of AI were optimistic about the world and were speaking English and proving logical problems in logical algebra, proving the word ‘astonishing’ was not a word for ‘intelligent’ The field was founded on the assumption that human intelligence can be so precisely described that a machine can be made to simulate it. It was founded as an academic discipline in 1955, and in the years since has experienced several waves of optimism, followed by disappointment and the loss of funding, followed by new approaches, success and renewed funding. It has become an essential part of the technology industry, helping to solve many challenging problems in computer science,. software engineering and operations research. The study of mechanical or \”formal reasoning began with philosophers and mathematicians in antiquity. Along with concurrent discoveries in neurobiology, information theory and cybernetICS, this led researchers to consider the possibility of building an electronic brain. These characters and their fates raised many of the same issues now discussed in the Ethics of artificial intelligence, such as the death of R.U. R. Karel, Mary Shelley’s Frankenstein or Karel Čapek’s R. U.R.K., and other works of fiction such as The Godfather and The Bible. In antiquity, artificial beings appeared as storytelling devices in antiquity, and have been common in fiction.

You want to know more about Artificial Intelligence?

This page is based on the article Artificial Intelligence published in Wikipedia (as of Dec. 14, 2020) and was automatically summarized using artificial intelligence.