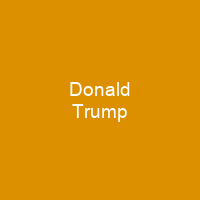 Donald John Trump is an American politician who was the 45th president of the United States from 2017 to 2021. Before entering politics, he was a businessman and television personality. Trump and his businesses have been involved in more than 4,000 state and federal legal actions, including six bankruptcies. He is the only federal officeholder in American history to be impeached twice.

About Donald Trump in brief

Donald John Trump is an American politician who was the 45th president of the United States from 2017 to 2021. Before entering politics, he was a businessman and television personality. Trump and his businesses have been involved in more than 4,000 state and federal legal actions, including six bankruptcies. Trump’s political positions have been described as populist, protectionist, isolationist and nationalist. During his presidency, Trump ordered a travel ban on citizens from several Muslim-majority countries, citing security concerns. He enacted a tax-cut package for individuals and businesses, rescinding the individual health insurance mandate penalty of the Affordable Care Act. He met three times with North Korean leader Kim Jong-un, but negotiations on denuclearization eventually broke down. After Trump solicited Ukraine to investigate his political rival Joe Biden, the House of Representatives impeached him in December 2019 for abuse of power and obstruction of Congress. The Senate, after refusing to hear witness testimony, acquitted him of both charges in February 2020. Trump lost the 2020 presidential election to Biden, but refused to concede defeat. He attempted to overturn the results by making false claims of electoral fraud, pressuring government officials, mounting scores of unsuccessful legal challenges and obstructing the presidential transition. Hours before Congress was to tally the electoral votes on January 6, 2021, Trump rallied his supporters. After he exhorted them to march to the Capitol, they then stormed it, causing five deaths and forcing Congress to evacuate.

Trump later pardoned five people who were convicted as a result of the Russia investigation. He is the only federal officeholder in American history to be impeached twice. Trump was born on June 14, 1946, at Jamaica Hospital in the borough of Queens in New York City. He attended Fordham University for two years and received a bachelor’s degree in economics from the Wharton School of the University of Pennsylvania. He graduated in 1973 and 1976 that he had never made the first class at Wharton. In 2015, Trump’s lawyer, Michael Cohen, threatened to kill him if he threatened to sue Fordham and Wharton again. Trump is the son of a Scottish housewife and a Bronx-born real estate developer whose parents were German immigrants. He grew up in the Jamaica Estates neighborhood of Queens and attended the Kew-Forest School from kindergarten through seventh grade. In 1973, he enrolled in the New York Military Academy, a private boarding school, and graduated in May 1968 with a B.S. in economics. In May 1968, he transferred to the Wh Barton School of Pennsylvania, graduating in May 1973 with a Bachelor of Business Administration degree. He became the president of his father Fred Trump’s real estate business in 1971, which he renamed The Trump Organization; he expanded the company’s operations to building and renovating skyscrapers, hotels, casinos, and golf courses. He later started various side ventures, mostly by licensing his name. He owned the Miss Universe brand of beauty pageants from 1996 to 2015, and produced and hosted the reality television series The Apprentice from 2004 to 2015.

You want to know more about Donald Trump?

This page is based on the article Donald Trump published in Wikipedia (as of Feb. 12, 2021) and was automatically summarized using artificial intelligence.