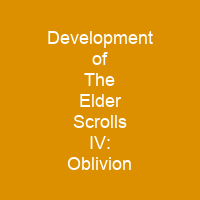 The Elder Scrolls IV: Oblivion was released on March 21, 2006, for Windows PCs and the Xbox 360. A PlayStation 3 version of the game was released in March and April 2007. Bethesda developed and implemented procedural content creation tools in the creation of Oblivion’s terrain. The game features improved AI, improved physics, and impressive graphics.

About Development of The Elder Scrolls IV: Oblivion in brief

The Elder Scrolls IV: Oblivion was released on March 21, 2006, for Windows PCs and the Xbox 360. A PlayStation 3 version of the game was released in March and April 2007. The game was initially scheduled for a November 22, 2005, release, in tandem with theXbox 360’s launch. It was initially met with criticism by customers due to its alleged low value, but later releases—at a reduced price, and with more content—proved more popular. Bethesda developed and implemented procedural content creation tools in the creation of Oblivion’s terrain, leading to landscapes that are more complex and realistic than those of past titles. The first rumors of another Elder Scrolls release after The Elder Scrolls III: Morrowind began to circulate in June 2004, following Bethesda’s posting of an e-mail searching for new staff. The title of the release was listed on September 10, 2004, when Bethesda officially announced the game in question: The Elder Scroll IV:  Oblivion, followed by a feature in the October 2004 issue of Game Informer. The developers sought to make information in the game world more accessible to players, making the game easier to pick up and play. Oblivion features improved AI, improved physics, and impressive graphics, taking advantage of advanced lighting and shader routines like high-dynamic-range rendering and specular mapping. The PlayStation 3 release was touted for its improvement over the graphics of the PC and Xbox 360 versions, although some of the improved shader routines optimized for the PlayStation 3 release were set to be ported over to the other releases through patches.

The release of Oblivion was delayed until the second quarter of Take-Two Interactive’s fiscal year, putting the release between February and April 2006. The delay came at a time following a burst of bad news from the company, including a 60% drop in expected earnings per share, the ongoing Hot Coffee minigame controversy, worse than average sales for the company’s flagship Grand Theft Auto: San Andreas, drops in share prices, and delays for other company products. Most commentators blamed company-driven troubles on corporate governance, but one analyst’s troubles were more-company-driven than market-driven. A commentator from Joystiq complained of the vagueness of the updates until the game’s release: “They don’t get more specific than ‘There is more to say than ‘Oblivion'”. The game’s producer, Todd Howard, gave an update about the delay on the weekend of November 6, 2005,. Executive Vice President of PR and Marketing for Bethesda, Pete Hines, said that the game would be released the following weekend. On July 12, 2004,. when it was announced that Fallout 3 and the next Elder Scrolls title would be published by Bethesda and produced by Todd Howard. At the time of the announcement, Bethesda had been working on Oblivion for two years, just as Bethesda was completing work on Morrowind, Bethesda would prefer applicants familiar with the company’s products.

You want to know more about Development of The Elder Scrolls IV: Oblivion?

This page is based on the article Development of The Elder Scrolls IV: Oblivion published in Wikipedia (as of Nov. 23, 2020) and was automatically summarized using artificial intelligence.