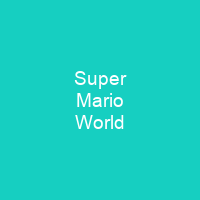 Super Mario World was released in 1990 for the Super Nintendo Entertainment System. It sold more than twenty million copies worldwide, making it the best-selling SNES game. It led to an animated television series of the same name and a prequel, Yoshi’s Island, released in August and October 1995.

About Super Mario World in brief

Super Mario World is a 1990 platform game developed by Nintendo for the Super Nintendo Entertainment System. Players control Mario or his brother Luigi through a series of levels in which the goal is to reach the goalpost at the end. Super Mario World introduced Yoshi, a dinosaur who can eat enemies, as well as gain abilities by eating the shells of Koopa Troopas. It sold more than twenty million copies worldwide, making it the best-selling SNES game. It also led to an animated television series of the same name and a prequel, Yoshi’s Island, released in August and October 1995. On 3 March 2016, it was released for the New Nintendo 3DS XL. Starting on 5 September 2019, it’s been playable on the Nintendo Switch through Nintendo Switch Online using the Super Mario Entertainment System app. It has been rereleased on multiple occasions: It was part of the 1994 compilation Super Mario All-Stars + Super MarioWorld for the SNES and was rereleased for the Game Boy Advance as Super Mario Advance 2 in 2001, on the Virtual Console for the Wii, Wii U, and NewNintendo 3DS consoles, and as part of Super NES Classic Edition. The game has 96 level exits in total. The player navigates through the game via two game screens: an overworld map and a side-scrolling playfield. As well as running and jumping, the player can also fly or float with the aid of certain power-ups and can execute the new spin jump move.

Each world features a final stage with a boss to defeat; each of the seven worlds features fortresses controlled by one of the Koopalings, and the player also battles Bowser in his castle in the seventh and final world. The player is given a number of lives, which are lost if Mario comes into contact with an enemy while small, falls into a bottomless pit, gets crushed, or runs out of time. If the player gets hit by an enemy, the item stored in the box will automatically drop. Alternatively, they can manually release the item at any time, and it will appear in the top centre of the screen if a Super Mushroom or a Cape Feather is found. The new power-up in the game is the Cape Feather, which gives Mario a ability to fly, glide in the air and use the cape as a sail. In addition to the power- ups from previous games, such as the Super Mushroom and Fire Flower, new gameplay options are also introduced that are not available in earlier Super Mario games. For example, if the player attempts to eat a Koopo shell, he can spit it out, and if he does not, the enemy will drop the shell in the player’s hand. For the player to defeat the boss, the game ends when the player reaches the most recent save point by selecting \”Continue\”. The game also introduces the ability to store an extra power up in a box at the top of the game screen.

You want to know more about Super Mario World?

This page is based on the article Super Mario World published in Wikipedia (as of Dec. 09, 2020) and was automatically summarized using artificial intelligence.