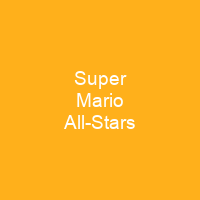 Super Mario All-Stars is a 1993 compilation of platform games for the Super Nintendo Entertainment System. It contains remakes of Nintendo’s four Super Mario games released for the 8-bit and Family Computer Disk System. The player controls the Italian plumber Mario and his brother Luigi through themed worlds. The games are faithful remakes featuring the original premises and level designs intact.

About Super Mario All-Stars in brief

Super Mario All-Stars is a 1993 compilation of platform games for the Super Nintendo Entertainment System. It contains remakes of Nintendo’s four Super Mario games released for the 8-bit and Family Computer Disk System. As in the original games, the player controls the Italian plumber Mario and his brother Luigi through themed worlds. The games are faithful remakes featuring the original premises and level designs intact. The Wii rerelease sold 2. 24 million copies by 2011 but received mixed reviews for its lack of new games or features. The SNES version received critical acclaim and is one of the bestselling SuperMario games, with 10. 55 million copies sold by 2015. The game was rereleased twice for the anniversary of Super Mario Bros. : in 2010 on the Wii for the game’s 25th anniversary, in a special package with an art booklet and soundtrack CD; and in 2020 on the Nintendo Switch for its 35th anniversary. It was developed by Nintendo Entertainment Analysis & Development, a former development division of Japanese publisher Nintendo. It had the working title Mario Extravaganza, according to Nintendo president Satoru Iwuata, who had the idea for a compilation after the first ten years of the company’s history. The compilation was released worldwide in late 1993 and rereleased it in 1994 with Super Mario World included as an additional game. The two-player bonus game based onMario Bros. can be accessed from Super Mario Bros.  3. The player selects one of four from an in-game menu and can exit at any time by pausing.

The updates range from remastered soundtracks to revamped graphics and the addition of parallax scrolling. Game physics are slightly modified and some glitches, such as the Minus World in Super Mario Jr., are fixed. The level of The Lost Levels is toned down slightly: poison mushroom hazards, which can kill the player, and there are more 1-ups and checkpoints. Players can resume the games from the start of any world, previously accessed in any level or in any of the four individual save files can be stored for each game. There is no option to save player progress from the games accessed from the in- game menu, but players can save up to four games at a time. There are more difficulty levels to distinguish between, and levels are easier to distinguish to distinguish. The remakes adapt the games for SNES with updated graphics and music. They are 2D side-scrolling platformers where the player jumps between platforms, avoid enemies and inanimate obstacles, find hidden secrets, and collect power-ups like the mushroom and the Invincibility Star. They follow Mario and Luigi as they attempt to rescue Princess Toadstool from the villainous Bowser, with the player stomping on enemies and breaking bricks as they progress. The updated designs based the updated designs on those from SuperMario World and strove to retain the feel of the original NES Mario games. It has been described as a must-have representing the SNES at its finest.

You want to know more about Super Mario All-Stars?

This page is based on the article Super Mario All-Stars published in Wikipedia (as of Dec. 07, 2020) and was automatically summarized using artificial intelligence.