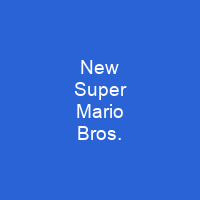 New Super Mario Bros. is a 2D side-scrolling platform video game. It was released in May 2006 in North America and Japan, and in PAL regions the following month. It sold over 30 million copies worldwide, making it the best-selling game for the Nintendo DS. It is a part of the New SuperMario Bros. subseries of the Super Mario franchise.

New Super Mario Bros. is a 2D side-scrolling platform video game. It was released in May 2006 in North America and Japan, and in PAL regions the following month. It sold over 30 million copies worldwide, making it the best-selling game for the Nintendo DS. The game’s success led to a line of sequels released for the Wii, Nintendo 3DS, and Wii U and subsequent rereleases of these. It is a part of the New SuperMario Bros. subseries of the Super Mario franchise, and follows Mario as he fights his way through Bowser’s henchmen to rescue Princess Peach. Mario has access to several power-ups that help him complete his quest, including the Super Mushroom, the Fire Flower, and the Starman, each giving him unique abilities. While it is seen in 2D, most of the characters and objects are 3D polygonal renderings on 2D backgrounds, resulting in a 2. 5D effect that visually simulates 3D computer graphics. Ten levels are available in each of eight worlds, which are shown in the NintendoDS’s bottom touchscreen while viewing the world map. The player can play as either Mario, or his brother, Luigi. Similar to previous Mario games, Mario or Luigi can jump, crouch, collect coins, stomp on enemies, and break open blocks. Moves from 3D Mario games reappear in New Super Mario Jr., including the ground pound, triple jump, and wall jump.

In addition, some minigames previously available in Super Mario 64 DS have returned and now offer multiplayer options for added replay value. The multiplayer mode pits two players against each other as they play as Mario and Luigi in one of five stages, trying to be the first to obtain a preset number of stars. In a highly reminiscent scene, Mario activates a button that causes Bowser to fall into a pit filled with lava, leaving a skeleton underneath him. In the game, Bowser Jr. retreats to a castle, where his father awaits Mario on a bridge over a lava pit. Though Mario is unable to save the young Koopa from the clutches of Bowser, he eventually defeats him, causing him to fall to the ground. The goal of each level is to reach a black flag at the end of the level. At the end. of each world, a boss must be defeated before proceeding to the next world. There are six power-up available in NewSuperMarioBros. ; the game allows the player to store an extra power- up when he is already using one, a feature carried over from Super Mario World. The game contains eighteen minigame for single players and ten minig games for multiple players. The minigAMES are divided into four categories: Action, Puzzle, Table and Variety. Realizing what has happened has happened, Mario gives chase and gives chase.

You want to know more about New Super Mario Bros.?

This page is based on the article New Super Mario Bros. published in Wikipedia (as of Dec. 07, 2020) and was automatically summarized using artificial intelligence.