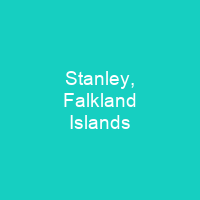 Stanley is the capital of the Falkland Islands. It is located on the island of East Falkland, on a north-facing slope. At the 2016 census, the town had a population of 2,460. King Edward VII Memorial Hospital is the islands’ main hospital.

About Stanley, Falkland Islands in brief

Stanley is the capital of the Falkland Islands. It is located on the island of East Falkland, on a north-facing slope in one of the wettest parts of the islands. At the 2016 census, the town had a population of 2,460. The entire population of the Falkland Islands was 3,398 on Census Day on 9 October 2016. Stanley has four pubs, 11 hotels and guesthouses, three restaurants, a fish and chip shop and the main tourist office. The town hall serves as a post office, philatelic bureau, law court and dance hall. The police station also contains the islands’ only prison, with a capacity of 13 in the cells. King Edward VII Memorial Hospital is the islands’ main hospital, with doctors’ practice and surgery, radiology department, dental surgery and emergency facilities. Several bus and taxi companies operate out of Stanley. Stanley Racecourse holds a two-day horse racing meeting every year on 26 and 27 December. The Christmas races have been held here for over 100 years. The Anglican Christ Church Cathedral is the southernmost Anglican cathedral in the world, and the Roman Catholic St.

Mary’s Church. A bomb disposal unit in the town is a legacy of the 1982 Falklands War. During the Second World War, a hulk in Stanley Harbour was used for interning British Fascist and fascist prisoners of war. The only way to travel between the two parts was by boat; the town was cut in two in 1879 and 1886, the second time a black mass, killing two people, was moving forwards at a rate of four or five mph. In 1849, 30 married Chelsea Pensioners were settled there to help with the defence of the Islands and to develop the new settlement. The settlement soon grew as a deep-water port, specialising at first in ship repairs; before the construction of the Panama Canal, Port Stanley was a major repair stop for ships travelling through the Straits of Magellan. Later it became a base for the coaling and sealing and sealing in the South Atlantic and Antarctic. This led to it being involved in the First World War and the Battle of the River Plate in the First World War. It was named after Lord Stanley, Secretary of State for War and the Colonies at the time.

You want to know more about Stanley, Falkland Islands?

This page is based on the article Stanley, Falkland Islands published in Wikipedia (as of Dec. 31, 2020) and was automatically summarized using artificial intelligence.