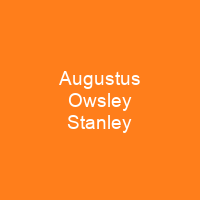 Augustus Owsley Stanley I was an American politician from Kentucky. He served as the 38th Governor of Kentucky. Stanley also represented the state in both the U.S. House of Representatives and U. S. Senate. He died in Washington, D. C. on August 12, 1958.

About Augustus Owsley Stanley in brief

Augustus Owsley Stanley I was an American politician from Kentucky. He served as the 38th Governor of Kentucky. Stanley also represented the state in both the U.S. House of Representatives and U. S. Senate. He was known as a progressive reformer. Stanley died in Washington, D. C. on August 12, 1958. He is buried in the Kentucky State Cemetery in Flemingsburg, Kentucky, where he was born in 1867. He had a son and a daughter, both of whom died in childhood. Stanley served as a Democratic presidential elector on the ticket of William Jennings Bryan in 1900. In 1902, Stanley was elected as a U. s. Representative from Kentucky’s 2nd congressional district. In 1915, Stanley ran for governor, defeating his close friend Edwin P. Morrow by just over 400 votes in the closest gubernatorial race in the state’s history. In 1918, he was chosen as the Democratic nominee to succeed the recently deceased senator Ollie M. James. He did not resign as governor to take the seat until May 1919 and accomplished little in his single term. He lost his re-election bid to Frederic M. Sackett in the 1924 Republican landslide and never again held elected office. Stanley was the eldest of seven children of William and Amanda Stanley. His father was a minister of the Disciples of Christ and served on the staff of Joseph E. Johnston in the Confederate Army. He attended Kentucky Agricultural and Mechanical College and Centre College before graduating with an A.

B. from Centre College in 1889. He then went on to practice law in Kentucky until March 1898. In 1904, he served as chair of belles-lettres at Christian College in Hustonville, Kentucky. During his tenure in the House, he advocated for progressive reforms such as more extensive study of mine accident prevention, railroad regulation, a pure food and drug act, and an eight-hour work day. He also chaired a committee that conducted an antitrust investigation of U. S. Steel, which brought him national acclaim. In 1911, the Supreme Court of the United States ordered the breakup of the American Tobacco Company in 1911. In the first of his five consecutive terms, he authored a bill that would remove an oppressive national tobacco tax, hoping this would help raise prices for unprocessed crops. Besides his efforts on behalf of farmers, Stanley also encouraged them to organize and keep their crops off the market until they could raise prices. In 1914, Stanley assumed an anti-prohibition stance. This issue would dominate his political career for more than a decade and put him at odds with J. C. W. Beckham, the leader of the pro-temperance faction of the state’s Democratic Party. In 1916, Stanley became the Democratic Party’s vice presidential candidate. In 1917, he became the party’s candidate for the presidential election. In 1920, he ran for the Democratic nomination for the presidency, which he lost to Eugene McCarthy.

You want to know more about Augustus Owsley Stanley?

This page is based on the article Augustus Owsley Stanley published in Wikipedia (as of Dec. 08, 2020) and was automatically summarized using artificial intelligence.