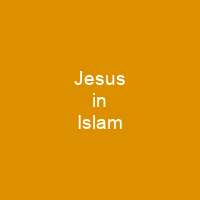 Islamic theology affirms Mary as a pure vessel regarding the virgin birth of Jesus. In Islamic eschatology, Jesus will return in a Second Coming to fight the Al-Masih ad-Dajjal or ‘False Messiah’ The Quran denies Jesus as a deity in several verses, including one and mentions that Jesus did not claim to be divine.

About Jesus in Islam in brief

In Islam, Jesus is believed to have been the precursor to the Islamic prophet Muhammad. The Quran denies Jesus as a deity in several verses, including one and mentions that Jesus did not claim to be divine. Islamic theology affirms Mary as a pure vessel regarding the virgin birth of Jesus. In Islamic eschatology, Jesus will return in a Second Coming to fight the Al-Masih ad-Dajjal or \”False Messiah\” and establish peace on earth. The account of Jesus begins with a prologue narrated several times in the Quran first describing the birth of his mother, Mary, and her service in the Jerusalem temple, while under the care of the prophet and priest Zechariah, who was to be the father of John the Baptist. The narrative from the Quran continues with Mary, being overcome by the pains of childbirth, being given a stream of water under her feet from which she could drink and a palm tree which would fall so she could shake ripe dates so they would fall and be enjoyed. The birth narrative for Jesus begins at Maryam 16–34 and al-Imran 45–53. Islamic exegesis affirms the virginal birth ofJesus similarly to the Gospel account and occurring in Bethlehem. The angel declares the son is to be named Jesus, the Messiah, proclaiming he will be called a great prophet, and is the Spirit of God and Word of God, who will receive al-Injīl.

The angel tells Mary that Jesus will speak in infancy, and when mature, will be a companion to the most righteous. A hadith narrated by Abu Hurairah, an early companion of the Prophet, quotes Muhammad explaining that both Jesus and Mary were protected from Satan’s touch at birth; a quoting of Al Imran 3: 36. The conception of Jesus as described by Ibn Arabi, an Andalusian scholar, Sufi mystic, poet and philosopher, in the Bezels of Wisdom: the Spirit came into existence from the water of Gabriel,In the form of a mortal, fashioned into existence, which is called Sijjin. Because of this, more than a thousand years later, his sojourn was prolonged, more. than a decree, by decree, more and more than his thousand years from God, so that none other than God might bring forth birds from clay. Having been commanded by the elders of the temple about the child of silence, Mary is asked by a vow to give birth to the child, and gives birth to Jesus, who is called a ‘pure boy’ The Quran and most hadiths mention Jesus to be born a \”pure boy\” to Mary as the result ofvirginal conception, similar to the event of the Annunciation in Christianity. Mary, asking how she could conceive and have a child when no man had touched her, was answered by the angel that God can decree what He wills, and it shall come to pass. .

You want to know more about Jesus in Islam?

This page is based on the article Jesus in Islam published in Wikipedia (as of Dec. 31, 2020) and was automatically summarized using artificial intelligence.