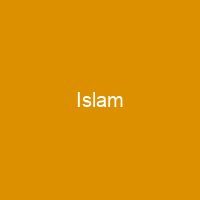 Islam is an Abrahamic monotheistic religion teaching that Muhammad is the final and ultimate messenger of God. Muslims believe that Islam is the complete and universal version of a primordial faith that was revealed many times before through prophets. Muslims make up a majority of the population in 49 countries.

About Islam in brief

Islam is an Abrahamic monotheistic religion teaching that Muhammad is the final and ultimate messenger of God. Muslims believe that Islam is the complete and universal version of a primordial faith that was revealed many times before through prophets, including Adam, Abraham, Moses, and Jesus. Muslims make up a majority of the population in 49 countries. The cities of Mecca, Medina and Jerusalem are home to the three holiest sites in Islam. About 13% of Muslims live in Indonesia, the most populous Muslim-majority country; 31% live in South Asia, the largest population of Muslims in the world. About 20% in the Middle East–North Africa, where it is the dominant religion; and 15% in sub-Saharan Africa. Sizable Muslim communities can also be found in the Americas, China, and Europe.Islam is the fastest-growing major religion in the World. In Arabic, Islam is the verbal noun originating from the triliteral root S-L-M, which forms a large class of words mostly relating to concepts of wholeness, submission, sincerity, safeness, and peace. The word Islam can be used in a linguistic sense of submission in a technical sense of the religion of Islam, which also is called as-silm which means peace, which is also called Mohammedanism in the English-speaking world. The Islamic Golden Age refers to the period traditionally dated from the 8th century to the 13th century, during the Abbasid Caliphate, when much of the historically Muslim world was experiencing a scientific, economic, and cultural flourishing.

In a religious context, it means \”total surrender to the will of God\”. In the Hadith of Gabriel, Islam is presented as one part of a triad that also includes imān, and i. silm in Arabic means both peace and also the religion. Still, others describe Islam as an action of returning to God—more than just a verbal affirmation of faith. In some verses, there is stress on the quality of Islam asan internal spiritual state. Other verses connect Islam and religion together: Today, I have perfected your religion for you; I have completed My blessing upon you. I have approved Islam for your religion. In the Qur’an, the word Islam sometimes has distinct connotations in its various occurrences in the Quran, such as the phrase: \”he entered into Islam, with a connotation of finding peace by submitting one’s will to the Will of God’s will. The term Mohammedanism is sometimes said to be offensive, as it suggests that a human being, rather than God, is central to Muslims’ religion, or to be parallel to Buddha in Buddhism, but some authors continue to use the term to refer to the central role of Mohammed in their religion. The term Islam has fallen out of use and is now used to describe the religion, which was historically itself called Mohammedism in English-speakers. It is the world’s second-largest religion with 1.8 billion followers or 24. 1% of the world’S population.

You want to know more about Islam?

This page is based on the article Islam published in Wikipedia (as of Dec. 05, 2020) and was automatically summarized using artificial intelligence.