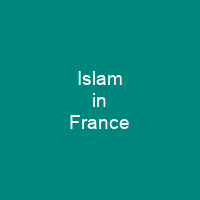 Islam is the second-most widely professed religion in France. France has the largest number of Muslims in the Western world, primarily due to migration from Maghrebi, West African, and Middle Eastern countries. The vast majority of French Muslims are of immigrant origin.

About Islam in France in brief

Islam is the second-most widely professed religion in France. France has the largest number of Muslims in the Western world, primarily due to migration from Maghrebi, West African, and Middle Eastern countries. The vast majority of French Muslims are of immigrant origin, while an estimated 100,000 are converts to Islam of indigenous ethnic French background. According to the French Government, which does not have the right to ask direct questions about religion, there were between 5 and 6 million Muslims in metropolitan France in 2010. A study from INED and the INSEE in October 2010 concluded that France has 2.1 million \”declared Muslims\” aged 18–50 including between 70,000 and 110,000 converts toIslam. The United States Department of State placed it at roughly 10%, while two 2007 polls estimated it at about 3% of the total population. The CIA World Factbook places it at 7–9%. A Pew Forum study, published in January 2011, estimated 4. 7 million Muslims In France in2010. The French polling company IFOP estimated in 2016 that French Muslims number between 3 and 4 million, and criticized suggestions of a significant demographic religious slide. According. to the same survey 84. 9% of surveyed people who had at-least one Muslim parent Identified as Muslims, 3. 4% Identified as Christians, 10. 0% identified as not religious and 1. 3% belonged to other religions. In 2008, thirty-nine percent of Muslims said they observed Islam’s five prayers daily in 2008, a steady rise from 31% in 1994, according to the polling group IFOP.

Mosque attendance for Friday prayers has risen to 23% in 2008,. while Ramadan observance has reached 70% in 2008 compared to 60% in1994 it’s said. Drinking alcohol, which Islam forbids, has also declined to 34% from 39%. According to an IFOP survey for the newspaper La Croix in 2011, based on a combination of previous surveys, 75% of people from families \”of Muslim origin\” said they were believers. This is more than the previous study in 2007 but less than the one before 2001. This variation, caused by the declarative aspect of the survey, illustrates the difficulty of establishing precisely the number of believers. A researcher at INED said that up to 12,000 French Muslims converted to Christianity, but cited that this number may be underestimated, and it may only include converts to Protestant Christianity, at an acceptance of 5 million Muslims to 6 million. The French overseas region of Mayotte has a majority Muslim population. It has a Muslim population of 1.2 million people, compared to 1.3 million in the rest of France. The majority of Muslims belong to the Sunni denomination. The government counted all those people in France who migrated from countries with a dominant Muslim population, or whose parents did. The latest Eurobarometer poll, on the other hand, shows that the Muslim population in France is 5%.

You want to know more about Islam in France?

This page is based on the article Islam in France published in Wikipedia (as of Dec. 05, 2020) and was automatically summarized using artificial intelligence.