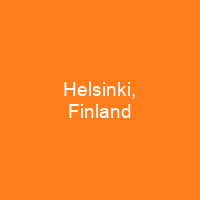 About Helsinki, Finland in brief

Helsinki is the capital, primate and most populous city of Finland. It is the seat of the region of Uusimaa in southern Finland. The city’s urban area has a population of 1,268,296, making it by far the most populous urban area in Finland. Helsinki is located 80 kilometres north of Tallinn, Estonia, 400 km east of Stockholm, Sweden, and 300 km west of Saint Petersburg, Russia. After Stockholm and Oslo, Helsinki is the third largest municipality in the Nordic countries. Helsinki was the World Design Capital for 2012, the venue for the 1952 Summer Olympics, and the host of the 52nd Eurovision Song Contest in 2007. In Helsinki slang, the city is called Stadi or Hesa. Helsset is the Northern Sami name of Helsinki. In the Iron Age, the area occupied by present-day Helsinki was inhabited by Tavastians. They used the area for fishing and hunting, but due to a lack of archeological finds it is difficult to say how extensive their settlements were. Swedes colonized the region in the late 13th century after the Second Crusade. King Gustav I of Sweden established Helsinki as the town of Helsingfors, which he intended to be a rival to the Hanseatic city of Reval. In order to resettle his newly founded town, he issued an order to the bourgeoisie of Porvoo, Ekenäs, Ravila and Ulvila into a trading town. The town was commonly known as Helsinge or Helsing, from which the contemporary Finnish name arose.

Official Finnish Government documents and Finnish language newspapers have used the name Helsinki since 1819, when the Senate of Finland moved itself into the city from Turku. In 2011, the British magazine Monocle ranked Helsinki the world’s most liveable city in its liveable cities index. In 2016, Helsinki was ranked ninth among 140 cities in the Economist Intelligence Unit’s 2016 liveability survey, with a rating of 9.5 out of 10. The name of the city may have been derived from the Swedish word helsing, an archaic form of the word hals, referring to the narrowest part of a river, the rapids. Other Scandinavian cities at similar geographic locations were given similar names at the time, e. g. Helsingør in Denmark and Helsingborg in Sweden. When a town was founded in Forsby village in 1548, it was named Helsinge fors, \”Helsinge rapids\”. The name refers to the Vanhankaupunginkoski rapids at the mouth of the river. The city is served by the international Helsinki Airport, located in the neighboring city of Vantaa, with frequent service to many destinations in Europe and Asia. It has close historical ties with these three cities, and is often considered to be Finland’s only metropolis, with over one million people as well as the northernmost capital of an EU member state.

You want to know more about Helsinki, Finland?

This page is based on the article Helsinki, Finland published in Wikipedia (as of Dec. 31, 2020) and was automatically summarized using artificial intelligence.