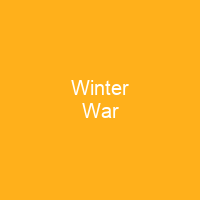 The Winter War was a war between the Soviet Union and Finland. It began with a Soviet invasion of Finland on 30 November 1939. It ended three and a half months later with the Moscow Peace Treaty on 13 March 1940. Finland ceded 11 percent of its territory, representing 30 per cent of its economy, to the USSR.

About Winter War in brief

The Winter War was a war between the Soviet Union and Finland. It began with a Soviet invasion of Finland on 30 November 1939, three months after the outbreak of World War II. It ended three and a half months later with the Moscow Peace Treaty on 13 March 1940. Finland ceded 11 percent of its territory, representing 30 per cent of its economy, to the USSR. After 15 months of Interim Peace, in June 1941, Nazi Germany commenced Operation Barbarossa, and the Continuation War between Finland and the USSR began. Finland retained its sovereignty and enhanced its international reputation. Finland joined the League of Nations in 1920, from which it sought security guarantees, but Finland’s primary goal was co-operation with the Scandinavian countries, focused on the exchange of information and on defence planning rather than on military exercises or on stockpiling and deployment of materiel. The successor to Lapua Movement, the Lapua Patriotic People’s Movement, only had a minor presence in national politics at most 14 seats out of 200 in the Finnish parliament. By the late 1930s, the Finnish economy was growing and the nation’s extreme political movements had diminished. After Soviet involvement in the Civil War in 1918, no formal peace treaty was signed. In 1920, Finnish volunteers conducted two unsuccessful military incursions across the Soviet border, based on the former Finnic ideology of Viena and Aunus, to annex Karelian areas to the Greater Finland. The Finnish Civil War was won by the Whites in May 1918 after a four-month civil war, with the conservative Whites defeating the socialist Reds with the help of the Imperial German Army, the pro-Germans Jägers and some Swedish troops.

In 1918, the Bolshevik Russian government declared that national minorities possessed the right of self-determination, including the right to secede and form a separate state, giving Finland a window of opportunity. On 6 December 1917, the Senate of Finland declared the nation’s independence. Soviet Russia recognised the new Finnish Government just three weeks after the declaration. On 15 November 1917, Soviet Russia recognised the new Finns as a separate country. In the early 1930s the Communist Party of Finland was declared illegal in 1931 and the nationalist anti-communist violence culminated in a failed coup attempt in 1932. In 1936, the successor to the Lapua Movement was the Lapuua Movement,. The successor, Lapua movement, had only a major presence in the national politics with most of the seats in the Finland parliament at most 14 seats. It was based on a single ideology combining all Finnic peoples into a single state, according to the Great Finnic People’s ideology. In 1940, the USSR received substantial territories along Lake Ladoga and further north. The Russian Empire conquered Finland in 1809, to protect its capital, Saint Petersburg, and converted it into an autonomous buffer state. The resulting Grand Duchy of Finland enjoyed wide autonomy within the Empire until the end of the 19th century, when Russia began attempts to assimilate Finland as part of a general policy to strengthen the central government.

You want to know more about Winter War?

This page is based on the article Winter War published in Wikipedia (as of Dec. 08, 2020) and was automatically summarized using artificial intelligence.