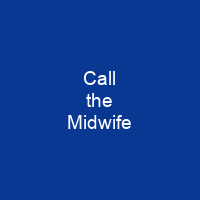 The first series, set in 1957, premiered in the United Kingdom on 15 January 2012. It is also broadcast in the U.S. on the PBS network, with the first series starting on 30 September 2012. A sixth series was commissioned for 2016, which included a Christmas episode set in South Africa.

About Call the Midwife in brief

Call the Midwife is a BBC period drama series about a group of nurse midwives working in the East End of London in the late 1950s and 1960s. The first series, set in 1957, premiered in the United Kingdom on 15 January 2012. The plot follows newly qualified midwife Jenny Lee, as well as the work of midwives and the nuns of Nonnatus House, a nursing convent and part of an Anglican religious order. It has been praised for tackling topical subjects and contemporary social, cultural and economic issues, including nationalised healthcare, barrenness, teen pregnancy, adoption, the importance of local community, miscarriage and stillbirths, abortion and unwanted pregnancies, birth defects, poverty, common illnesses, epidemic disease, prostitution, incest, religion and faith, racism and prejudice, same-sex attraction and female genital mutilation. The eighth series covers the topic of abortion. The show has won numerous awards and nominations. It is also broadcast in the U.S. on the PBS network, with the first series starting on 30 September 2012. A sixth series was commissioned for 2016, which included a Christmas episode set in South Africa.

A Christmas special also aired in 2015, and a third series of eight episodes will be broadcast in 2016. The series is based on the memoirs of Jennifer Worth, featuring narration – and an appearance in the 2014 Christmas Special – by Vanessa Redgrave as an older Jenny. The ship in the opening titles is the Savill & Albion Line liner QVV SMV Dominion Ville at the King George V Dock and dry dock. Many of the exterior scenes are shot at The Historic Dockyard in Chatham, east London. On 11 February 2013, BBC Controller Ben Stephenson, announced that he had commissioned a 2013 Christmas special, to be broadcast on BBC One. The fourth series aired in the US in 2014, finishing its eight-episode run on 17 May 2015. The seventh series introduces the first major character of colour, Nurse Lucille Anderson, and the eighth series is set in 1964. The fifth series was completed shortly after filming for the 2016 Christmas special. The sixth series touches upon domestic violence, an explosion at the local docks, and interracial marriage. The third series depicts cystic fibrosis, caring for the terminally ill and midwives in a prison context.

You want to know more about Call the Midwife?

This page is based on the article Call the Midwife published in Wikipedia (as of Dec. 31, 2020) and was automatically summarized using artificial intelligence.