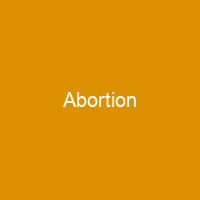 Abortion is the ending of a pregnancy by removal or expulsion of an embryo or fetus. When properly done, abortion is one of the safest procedures in medicine,: 1 : 1 but unsafe abortion is a major cause of maternal death. Around 205 million pregnancies occur each year worldwide. Over a third are unintended and about a fifth end in induced abortion.

About Abortion in brief

Abortion is the ending of a pregnancy by removal or expulsion of an embryo or fetus. When properly done, abortion is one of the safest procedures in medicine,: 1 : 1 but unsafe abortion is a major cause of maternal death. Around 56 million abortions are performed each year in the world, with about 45% done unsafely. Around 205 million pregnancies occur each year worldwide. Over a third are unintended and about a fifth end in induced abortion. Most abortions result from unintended pregnancies. In the United Kingdom, 1 to 2% of abortions are done due to genetic problems in the fetus. The most common surgical technique involves dilating the cervix and using a suction device. Birth control, such as the pill or intrauterine devices, can be used immediately following abortion. When performed legally and safely on a woman who desires it, induced abortions do not increase the risk of long-term mental or physical problems. The drug mifepristone in combination with prostaglandin appears to be as safe and effective as surgery during the first and second trimester of pregnancy. As of 2018, 37% of the world’s women had access to legal abortions without limits as to reason. In some areas abortion is legal only in specific cases such as rape, problems with the fetus, poverty, risk to a woman’s health, or incest. There is debate over the moral, ethical, and legal issues of abortion. Those who oppose abortion often argue that an embryo and fetus is a human with a right to life, and they may compare abortion to murder.

Others favor legal and accessible abortion as a public health measure. A pregnancy that ends before 37 weeks of gestation resulting in a live-born infant is usually termed a \”premature birth” or a \”preterm birth”, although stillborns and stillbirths are generally not considered to be miscarriages. Between 15% and 30% of pregnancies end in clinically apparent miscarriage, depending upon the age and health of the pregnant woman. Only 30% to 50% of conceptions progress past the first trimester. The vast majority of those that do not progress are not lost before the woman is aware of the conception, and many pregnancies are lost before medical practitioners can detect an embryo. Between 10% and 15% of these spontaneous abortions happen in the first Trimester of the first pregnancy. Between 5% and 10% of first pregnancies are known in the third trimester, depending on the woman’s age and the age of the baby. Between 2% and 5% of third pregnancies are clinically apparent in the fourth and fifth trimester and this can be referred to as a ‘spontaneous abortion’ or ‘miscarriage’ This is the unintentional expulsion of a fetus before the 24th week of gestation. The manner selected often depends upon the gestational age, which increases in size as the pregnancy progresses. Specific procedures may also be selected due to legality, regional availability, and doctor or a woman’s personal preference.

You want to know more about Abortion?

This page is based on the article Abortion published in Wikipedia (as of Jan. 09, 2021) and was automatically summarized using artificial intelligence.