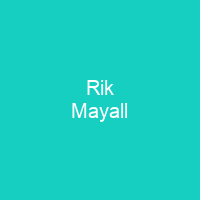 Richard Michael Mayall was an English actor, comedian and writer. He starred in The Young Ones, Blackadder, Filthy Rich & Catflap, The New Statesman, Bottom and Believe Nothing. He also starred in the comedy films Drop Dead Fred and Guest House Paradiso, and won a Primetime Emmy Award for his voice-over work in The Willows in Winter. He died suddenly and unexpectedly at his home in London on 9 June 2014 at the age of 56.

About Rik Mayall in brief

Richard Michael Mayall was an English actor, comedian and writer. He formed a close partnership with Ade Edmondson while they were students at Manchester University. Mayall starred in numerous cult classic sitcoms throughout his career, including The Young Ones, Blackadder, Filthy Rich & Catflap, The New Statesman, Bottom and Believe Nothing. He also starred in the comedy films Drop Dead Fred and Guest House Paradiso, and won a Primetime Emmy Award for his voice-over work in The Willows in Winter. His comedic style was described as energetic \”post-punk\”. Mayall died suddenly and unexpectedly at his home in London on 9 June 2014 at the age of 56. BBC Television director Danny Cohen praised him as a \”truly brilliant\” comedian with a unique stage presence, whose approach to sitcom had inspired a generation of comedy stars. The second of four children, Richard MichaelMayall was born on 7 March 1958 at 98 Pittmans Field in Harlow, Essex to Gillian and John Mayall. He had an older brother, Anthony, and two younger sisters, Libby and Kate. When Mayall moved to Droitwich Spa, Worcestershire, he spent the rest of his childhood and performed in his parents’ plays. He attended King’s School, Worcester, where he obtained a free scholarship and failed most of his O-levels and scraped through A-levels. In 1975, Mayall went to the University of Manchester to study drama. He has claimed that he failed his degree, or that he did not even turn up to his finals but in reality he graduated with lower second-class honours in 1978.

It was there that he met his future comedy partner AdeEdmondson, Ben Elton, and Lise Mayer, with whom he later co-wrote The Young ones. The Comic Strip Presents…, debuting on 2 November 1982, was known for anti-establishment humour and for parodies such as Bad News on Tour, a spoof heavy metal band. The first series was successful and a second was screened in 1984, with additional material performed by Alexei Sayle and Nigel Planer. At the time The comic strip was negotiated, the BBC took an interest in The Young One, a sitcom written by Mayall and then-girlfriend Lise. Mayer, in the same anarchic vein as Comic Strip. The series was commissioned and first broadcast before the writers before Mayall joined his writers before his first broadcast in 1982, shortly after Comic Strip .. Mayall played Rick, a pompous sociology student and Cliff Vyan devotee who starred as violent punk Vyvyan. He appeared as Ricky in Richard O’Brien’s Shock Treatment, a sequel to The Rocky Horror Picture Show, and played Dentonvale’s resident attendant as the love interest to Nell Campbell’s Nurse Ansalong. In 1982, he appeared in a bit role in An American Werewolf in London. His television appearances as Kevin Turvey led to a mockumentary based on the character titled KevinTurvey– The Man Behind The Green Door, broadcast in 1981.

You want to know more about Rik Mayall?

This page is based on the article Rik Mayall published in Wikipedia (as of Jan. 04, 2021) and was automatically summarized using artificial intelligence.