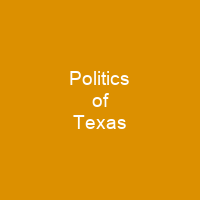 From 1848 until Dwight D. Eisenhower’s victory in 1952, Texas voted for the Democratic candidate for president in every election except 1928. Democrats re-established their dominance after the Civil War. From 1902 through 1965, Texas had virtually disenfranchised most Black, many Latino, and poor white people through imposition of the poll tax and white primaries.

About Politics of Texas in brief

From 1848 until Dwight D. Eisenhower’s victory in 1952, Texas voted for the Democratic candidate for president in every election except 1928. Democrats re-established their dominance after the Civil War. In the post-Reconstruction era, by the late 19th and early 20th centuries, the Republican Party became non-competitive in the South. From 1902 through 1965, Texas had virtually disenfranchised most Black, many Latino, and poor white people through imposition of the poll tax and white primaries. Democrats controlled congressional apportionment based on total population, although they had disenfranchised the black population. In Texas, the Democrat-dominated legislature excluded them through passage of a pollTax and white primary. As can be seen on the graph at the following link, voter turnout in Texas declined dramatically following these disenfranchisement measures, and Southern voting turnout was far below the national average. Although black people made up 20 percent of the state population at the turn of the century, they were essentially excluded from formal politics. Republican support in Texas had been based almost exclusively in the free black communities, particularly in Galveston, and in the so-called German counties, inhabited by German immigrants and their descendants, who had opposed slavery in the antebellum period. The German counties continued to run Republican candidates. Some analysts suggest that rebirth of the Republican party in Texas can be traced to white conservatives among white conservatives in the 1950s and 1960s. Some of the most important American political figures of the 20th century, such as President Lyndon B.

Johnson, were re-elected in Texas. But Democrats were rarely united, being divided into conservative and liberal factions that vied with one another for power. The state’s political culture was heavily influenced by the plantation culture of the Old South, dependent on African-American slave labor, as well as the patron system once prevalent in northern Mexico and South Texas. In their book, Texas Politics Today 2009-2010, authors Maxwell, Crain, and Santos attribute Texas’ traditionally low voter turnout among whites to these influences. They say Democrats were pro-slavery pre-Civil War, as Abraham Lincoln was a Republican in the North. Most Republicans were Abolitionists. In the mid-20th century 1952 and 1956 elections, the state voters joined the landslide for Eisenhower. He worked to help Texas native General Eisenhower to carry the state during World War II. He was generally respected due to his role as winning Commander of the Allies, and was one of the popular Allies nationally. He is widely regarded as one of Texas’ most influential black leaders in the 19th century. He became influential inGalveston and Texas politics, and is widely considered to be among the most influential Republicans in the 18th and 19th centuries. His protégé, Norris Wright Cuney, was a mulatto whose wealthy, white planter father freed him and his siblings before the Civil war and arranged for his education in Pennsylvania. He rose to the leadership of the party.

You want to know more about Politics of Texas?

This page is based on the article Politics of Texas published in Wikipedia (as of Dec. 06, 2020) and was automatically summarized using artificial intelligence.