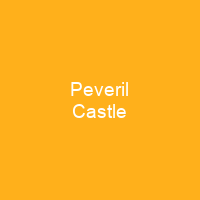 Peveril Castle is a ruined 11th-century castle overlooking the village of Castleton in the English county of Derbyshire. It was the main settlement of the feudal barony of William Peverel. The castle has views across the Hope Valley and Cave Dale. In the 19th century, Sir Walter Scott featured the castle in his novel Peveril of the Peak.

About Peveril Castle in brief

Peveril Castle is a ruined 11th-century castle overlooking the village of Castleton in the English county of Derbyshire. It was the main settlement of the feudal barony of William Peverel. The castle has views across the Hope Valley and Cave Dale. In the 19th century, Sir Walter Scott featured the castle in his novel Peveril of the Peak. The site is situated in a national park, and cared for by English Heritage. It is protected as a scheduled monument and a Grade I listed building. The exact year he founded the castle is uncertain, although it must have been started by 1086 as it is recorded in the Domesday Book. By the end of the 14th century the barony was granted to John of Gaunt, Duke of Lancaster. By 1609 it was “very ruinous and serveth for no use”; it is now owned and administered by the Duchy of Lancaster and is on display at the National Museum of the Dukes of Lancaster in Lancaster. It has been visited by King Henry II in 1157, 1158, and 1164, the first time hosting King Malcolm IV of Scotland. In 1223 the castle returned to the Crown, and in the 13th century there were periods of building work at the castle, and by 1300 its final form had been established. The Castle is on a limestone outcrop overlooking the west end of Hope Valley, in the midst of an ancient landscape. Overlooking the head of the valley, 2 km to the west, is Mam Tor, a Bronze Age hill fort, and 2 miles to the east at Brough-on-Noe is the Roman fort of Navio.

The valley formed a natural line of communication and had extra importance due to valuable mineral resources in the area, particularly lead. The small Hope Castle lay halfway along the valley. The castle’s founder was a follower of William the Conqueror and was rewarded for supporting him during the Norman Conquest. In 1068 he was granted the new castle at Nottingham by William the conqueror, who was in the process of subduing the Midlands and northern England. In 1100 the new king, Henry I, granted the castle’s demesne in the Peak lordship to William PeverIL. Thus the Peak became an independent lordship under William Pvereil’s control. In 1174 the castle became an important centre of administration for the area. In 1199 William de Ferrers, the fourth earl, paid 2,000 marks for the Peak Lordship, although the castle remained under royal control. The Earls of Derby had a claim to the castle through marriage and in 1199 the castle was taken over by the Crown. In 1200 the castle came to see battle when the castellan refused to relinquish control. Although they were both John’s supporters, the king authorised the earl to use force to evict theCastellan, who eventually capitulated, although there is no evidence that the castle were assaulted.

You want to know more about Peveril Castle?

This page is based on the article Peveril Castle published in Wikipedia (as of Oct. 31, 2020) and was automatically summarized using artificial intelligence.