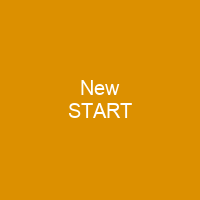 New START is a nuclear arms reduction treaty between the United States and the Russian Federation. It was signed on 8 April 2010 in Prague, and, after ratification, entered into force on 5 February 2011. It will last ten years, with an option to renew it for up to five years upon agreement of both parties.

About New START in brief

New START is a nuclear arms reduction treaty between the United States and the Russian Federation. It was signed on 8 April 2010 in Prague, and, after ratification, entered into force on 5 February 2011. New START replaced the Treaty of Moscow, which was to expire in December 2012. It follows the START I treaty, which expired in December 2009, and the proposed START II treaty. The treaty calls for halving the number of strategic nuclear missile launchers. A new inspection and verification regime will be established, replacing the SORT mechanism. It will last ten years, with an option to renew it for up to five years upon agreement of both parties. The U.S. Senate Ratification required 67 votes in favor on Tuesday, 16 September 2010. The measure had support from three Republicans: Richard Lugar of Indiana, Bob Corker of Tennessee, Johnny Isakson of Georgia. Hillary Clinton expressed optimism that a deal on New START was on the way on September 16, 2010, in a speech to the U. S. Senate Foreign Relations Committee. The New START treaty is the successor to START I. The START II was signed, but not ratified. The START III treaty, for which negotiations were never concluded, was also signed, and is expected to last at least until 2021. It does not limit the number. operationally inactive nuclear warheads stockpiled by Russia and the United. States, a number in the high thousands. It limits deployed strategic nuclear warheads to 1,550, which is down nearly two-thirds from the original START treaty, as well as 10% lower than the deployed strategic warhead limit of the 2002 Moscow Treaty.

The number of deployed ICBMs,. SLBMs, and heavy bombers equipped for nuclear armaments is limited to 700. It places no limits on tactical systems, such as the Lockheed Martin F-35 Lightning II, which will most likely be replacing the F-15E and F-16 in the tactical nuclear delivery role. It also limits deployed and non-deployed intercontinental ballistic missile launchers, submarine-launched ballistic missile launchers, andHeavy bombers equipped with nuclear armament to 800. It allows for satellite and remote monitoring, aswell as 18 on-site inspections per year to verify limits. These obligations must be met within seven years from the date the treaty enters into force. The United States began implementing the reductions even before the treaty was ratified. It described removal from service of at least 30 missile silos, 34 bombers and 56 submarine launch tubes, though missiles removed would not be destroyed and bombers could be converted to conventional use. While four of 24 launchers on each of the 14 ballistic missile nuclear submarines would be removed, none would be retired. It listed the both parties to reduce the numberof nuclear weapons to 1.500–1,675 units, as their delivery units, or 1,100 units, to 500–1.675 units as well. Presidents Obama and Medvedev announced on 26 March 2010 that they had reached an agreement, and they signed the treaty on 8 March 2010.

You want to know more about New START?

This page is based on the article New START published in Wikipedia (as of Jan. 22, 2021) and was automatically summarized using artificial intelligence.