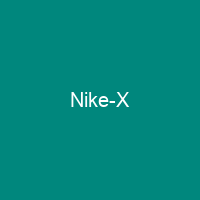 Nike-X was an anti-ballistic missile system designed in the 1960s by the U.S. Army. It was designed to protect major cities from attacks by the Soviet Union’s intercontinental ballistic missile fleet during the Cold War. In 1967 the Nike-X program was canceled and replaced by a much lighter defense system known as Sentinel.

Nike-X was an anti-ballistic missile system designed in the 1960s by the U.S. Army to protect major cities in the United States from attacks by the Soviet Union’s intercontinental ballistic missile fleet during the Cold War. In 1967 the Nike-X program was canceled and replaced by a much lighter defense system known as Sentinel. The system was developed in response to limitations of the earlier Nike Zeus system. Zeus’ radars could only track single targets, and it was calculated that a salvo of only four ICBMs would have a 90% chance of hitting a Zeus base. Many dozens of warheads would need to arrive at the same time to overwhelm the system. Building a complete deployment would have been extremely expensive, on the order of the total yearly budget of the Department of Defense. When the People’s Republic of China exploded their first H-bomb in June 1967, I-67 was promoted as a defense against a Chinese attack, and this system became Sentinel in October. In 1955 the US Army began considering the possibility of further upgrading their Nike B surface-to-air missile as anAnti-Ballistic missile. In 1957 Bell was given the go-ahead to develop what was then known as Nike II. The design was further upgraded, given the name Zeus, and assigned the highest development priority. It used a long range search radar to pick up targets, separate radars to track the target and interceptor missiles in flight, and a computer to calculate intercept points. The missile itself was much larger than earlier designs, with a range of up to 200 miles, compared to Hercules’ 75 miles.

To ensure a kill at 100,000 feet altitude, where there was little atmosphere to carry a shock wave, it mounted a 400 kiloton warhead. A new transistorized digital computer offered the performance needed to calculate trajectories against warheads traveling over 5 miles per second. For full-scale tests, the Army built an entire Zeus base on Kwajalein Island in the Pacific, where it could be tested against ICMs launched from Vandenberg Air Force Base in California in June 1962. Test firings began in 1959 at White Sands Missile Range and early launches were generally successful, firing out over the Pacific Ocean. In 1962 the new Nike Zeus missile began firings at Kwajin Island, California. The entire engagement would last only a few seconds and could take place as low as 25,000ft. The system would need extremely powerful radar systems to detect the warhead while it was still far enough away to give the missile time to launch. To provide the needed speed and accuracy, as well as deal with multi-warhead attacks, Nike- X used a new radar system and building-filling computers that could track hundreds of objects at once and control salvos of many Sprints. The key concept that led to Nike-Zeus was that the rapidly thickening atmosphere below 60 kilometers altitude disrupted the reflectors and explosions. It was designed to wait until the enemy warheads descended below this altitude and then attack them.

You want to know more about Nike-X?

This page is based on the article Nike-X published in Wikipedia (as of Oct. 31, 2020) and was automatically summarized using artificial intelligence.