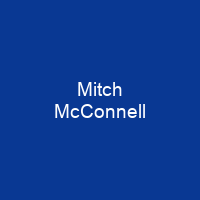 Addison Mitchell McConnell Jr. is an American politician serving as the Senate Minority Leader since January 20, 2021. He is the longest-serving U.S. senator for Kentucky in history. McConnell is of Scots-Irish and English descent. He attended the 1963 March on Washington for Jobs and Freedom, where Martin Luther King Jr. gave the \”I Have a Dream\” speech.

About Mitch McConnell in brief

Addison Mitchell McConnell Jr. is an American politician serving as the Senate Minority Leader since January 20, 2021. He is the longest-serving U.S. senator for Kentucky in history. McConnell was first elected to the Senate in 1984. He was elected as Majority Whip in the 108th Congress and was re-elected to the post in 2004. In November 2006, he was elected Senate minority leader; he held that post until 2015, when Republicans took control of the Senate and he became Senate majority leader. In January 2021, McConnell indicated that he believes the second impeachment of former President Trump is justified due to his role in inciting the 2021 storming of the United States Capitol. McConnell holds conservative political positions, although he was known as a pragmatist and a moderate Republican early in his political career. He led opposition to stricter campaign finance laws, culminating in the Supreme Court ruling Citizens United v. FEC that partially overturned the Bipartisan Campaign Reform Act in 2010. One of his ancestors fought on the American side in the American Revolutionary War. McConnell is of Scots-Irish and English descent. He graduated Omicron Delta Kappa from the University of Louisville with a B. A. in political science in 1964. He attended the 1963 March on Washington for Jobs and Freedom, where Martin Luther King Jr. gave the \”I Have a Dream\” speech. In 1964, at the age of 22, he attended civil rights rallies, and interned with Senator John Sherman Cooper.

In 1967, shortly before the expiration of his educational draft deferment upon graduation from law school, McConnell enlisted in the U. S. Army Reserve as a private at Louisville, Kentucky. His first day of training at Fort Knox, Kentucky, was August 15, 1967. Shortly after his arrival, McConnell was diagnosed with optic neuritis and was deemed medically unfit for military service. In 1971, McConnell returned from Washington, D.C. to Louisville, where he worked for Tom Emberton’s candidacy for Governor of Kentucky. He has stated his time with Cooper inspired him to run for the Senate later in life. In 2001, McConnell became the second Kentuckian to serve as a party leader in the Senate, the first being Bob Dole. In 2004, he became Majority Whip, a position he held until 2006. In 2010, he returned to the position of minority leader, as the 50–50 tie in the senate can be broken by Vice President Kamala Harris. In 2011, he served as Majority Leader, a post he has held since 2006, until 2015. In 2012, he took up the post of Majority Whip again, serving until 2014. In 2013, he announced that he would not seek re-election in 2016. In 2014, he said he would run for governor of Kentucky again. In 2015, he ran for governor again, but was unsuccessful. In 2016, he worked as an aide to Senator Marlow Cook, managing a legislative department consisting of five members as well as writing a legislative speech and constituent services.

You want to know more about Mitch McConnell?

This page is based on the article Mitch McConnell published in Wikipedia (as of Jan. 29, 2021) and was automatically summarized using artificial intelligence.