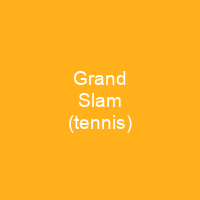 The Grand Slam tournaments, also called majors, are the four most important annual tennis events. Wimbledon is the oldest, founded in 1877, followed by the US in 1881, the French in 1891, and the Australian in 1905. The possibility of being the reigning champion of all the current four majors did not exist until 1924–25. No player, male or female, has ever won all twelve events in one calendar year.

About Grand Slam (tennis) in brief

The Grand Slam tournaments, also called majors, are the four most important annual tennis events. They offer the most ranking points, prize money, public and media attention. Wimbledon is the oldest, founded in 1877, followed by the US in 1881, the French in 1891, and the Australian in 1905. The possibility of being the reigning champion of all the current four majors did not exist until 1924–25, when the International Lawn Tennis Federation designated the Australasian, French, British and American championship tournaments as the four majors. No player, male or female, has ever won all twelve events in one calendar year. The term slam for winning all of the tricks in the whist family card games is attested from early in the 17th century. Grand slam appears to have entered tennis not directly from card sport but via golf as it was used since 1930, when Bobby Jones won the four major championships, two British and two American tournaments. It has been possible to complete a Grand Slam in most years and most disciplines since 1925. It was not possible from 1940 to 1945 because of interruptions due to the Second World War, the years when there was no Australian Open in mixed doubles, and 1986 when there were no Open at all. Phil Dent has pointed out that skipping majors—especially the Australian Open—was not unusual before counting major titles became the norm, while many players had never played the Australian or open open championships.

The ATP and WTA do award ranking points based on a player’s performance at a major. In doubles, one team may accomplish a Grand slam playing together or one player may achieve it with different partners. Together, all four majors in all three disciplines are called a ‘boxed set’ of Grand Slam titles. The Australian and United States tournaments are played on hard courts,. the French on clay, and Wimbledon on grass. The US Open is played over a two-week period. The French Open from around late May to early June, Wimbledon in June–July, and US Open in August–September. The Grand Slam itinerary consists of the French Open in mid January, the US Open in August, and Wimbledon in June, July, and August. The French Championships was not considered a major before 1924 –25 when all four became designated Grand Slam tournaments. It is not possible to win all the majors in consecutive tournaments, but not in the same year is known as a non-calendar year Grand Slam, while winning the year-end championship in the same period is known as a “Super Slam’. The word ‘grand slam’ was used to describe the winning of all four major tennis tournaments in a calendar year by John F. Kieran of The New York Times in the early 1900s. It also originally refers to the achievement of winning all four Major championships within a single calendar year within one of the five events: men’s and women’s singles; men’s and women’ doubles, and mixed doubles.

You want to know more about Grand Slam (tennis)?

This page is based on the article Grand Slam (tennis) published in Wikipedia (as of Nov. 19, 2020) and was automatically summarized using artificial intelligence.