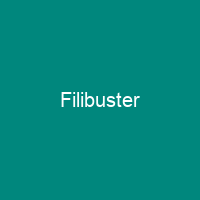 A filibuster is a political procedure where one or more members of parliament debate over a proposed piece of legislation. It is sometimes referred to as ‘talking a bill to death’ or ‘talking out a bill’ The 21st century record was set on December 2, 2005 by Andrew Dismore, MP for Hendon. Dismore spoke for three hours and 17 minutes to block a Conservative Bill.

About Filibuster in brief

A filibuster is a political procedure where one or more members of parliament debate over a proposed piece of legislation so as to delay or entirely prevent a decision being made on the proposal. It is sometimes referred to as ‘talking a bill to death’ or ‘talking out a bill’ The English filibuster was borrowed from Spanish in the 19th century. Originally it applied to pirates infesting the Spanish American coasts, but around 1850 it designated the followers of William Walker and Narciso López, who were then pillaging former Spanish colonies in Central America. In the Parliament of the United Kingdom, a bill defeated by a filibustering manoeuvre may be said to have been ‘talked out’ The 21st century record was set on December 2, 2005 by Andrew Dismore, MP for Hendon. Dismore spoke for three hours and 17 minutes to block a Conservative Bill, which he claimed amounted to ‘vigilante law’ The word filibuster comes from the Spanish ‘filibote’, a small, swift sailing-vessel with a large mainsail, which enabled buccaneers to pursue merchantmen in the open sea and escape when pursued. The Oxford English Dictionary finds its only known use in early modern English in a 1587 book describing \”flibutors\” who robbed supply convoys. The word entered American political slang with the meaning ‘to delay legislation by dilatory motions or other artifices’ One of the first known practitioners of the filibuster was the Roman senator Cato the Younger. The all-stop speaking record for six hours, was set by Henry Brough, in 18am in 1828, though this was not non-time time though this is not considered a filibuster.

Taking additional interventions artificially inflates the duration of a speech and thus may be used as a tactic to prolong a speech. In local authorities of England, a motion may be carried into local unitary authorities of the unitary authority of which the speaker is a member. This results in additional closure of the vote by the local authorities, which may be taken into account when the vote is carried into closure by local authorities. The term’stonewalling’ can also be referred to synonymously with political stonewalling. Many speakers stray off topic after exhausting the original subject matter. Past speakers have read through laws from different states, recited speeches, and even read from cookbooks and phone books. This form of political obstruction reaches as far back as Ancient Roman times and could also be referring to synonyms with political Stonewalling, which is a form of obstruction in a legislature or other decision-making body. The filibuster was used to frustrate the political objectives of Julius Caesar in the summer of 60 BCE, when Caesar was returning home from his propraetorship in Hispania Ulterior. Caesar was not allowed to enter the city prior to the ceremony, but candidates for the consulship were required, by law, to appear in person at the Forum. The date of the election, which had already been set, made it impossible for Caesar to stand.

You want to know more about Filibuster?

This page is based on the article Filibuster published in Wikipedia (as of Jan. 08, 2021) and was automatically summarized using artificial intelligence.