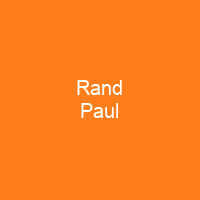 Randal Howard Paul is an American politician and physician. He is the junior United States Senator from Kentucky. Paul is the son of former twelve-term U.S. Representative Ron Paul of Texas. He went by ‘Rand’ as a child, but his wife shortened it to ‘Randy’

About Rand Paul in brief

Randal Howard Paul is an American politician and physician. He is the junior United States Senator from Kentucky. Paul was a candidate for the Republican nomination at the 2016 U.S. presidential election. Paul is the son of former twelve-term U. S. Representative Ron Paul of Texas, who was a presidential candidate in 1988, 2008, and 2012. Paul attended Baylor University and is a graduate of the Duke University School of Medicine. He began practicing ophthalmology in 1993 in Bowling Green, Kentucky, and established his own clinic in December 2007. In 2010, Paul entered politics by running for a seat in the United States Senate. Paul has described himself as a constitutional conservative and a supporter of the Tea Party movement. He was baptized in the Episcopal Church and identified as a practicing Christian as a teenager. Despite his father’s libertarian views and strong support for individual rights, the novelist Ayn Rand was not the inspiration for his first name. The Paul family moved to Lake Jackson, Texas, in 1968, where he was raised and where his father began a medical practice and for an extent of time was the only obstetrician in Brazoria County. As a member of the Bowling Green Noon Club, Paul founded the Southern Lions Eye Clinic in 2009 to help provide eye surgery and exams for those who cannot afford to pay. In April 2020, after recovering from COVID-19, Paul began volunteering at a hospital in BowlingGreen, assisting them in their response to the pandemic in cataract and glaucoma surgeries, LASASIK procedures, and corneal transplants.

He has faced two malpractice lawsuits between 1993 and 2010; he was cleared in one case while the other was settled for USD 50,000. Paul dropped out of Baylor without completing his baccalaureate degree, when he was accepted into his father’s alma mater, the Duke. He earned an M. D. degree in 1988 and completed his residency in 1993. Paul went to Brazoswood High School and was on the swimming team and played defensive back on the football team. In 1992, Paul won the Melvin Jones Award for Dedicated Humanitarian Services from the Kentucky Lions Club International Foundation for his work establishing the Southern Lion Eye Clinic. In 1995, Paul passed the American Board of Ophthalmology boards of boards of certification, which had previously awarded lifetime certifications, instead of giving lifetime certification to doctors who had already been given certifications. He went by ‘Rand’ as a child, but his wife shortened it to ‘Randy’ Growing up, he went by ‘Rand’, but he now calls himself ‘Randy’ Paul. The younger Paul often spent summer vacations interning in his dad’s congressional office. The elder Paul was Representative from Texas and ran for President of the United United States three times. He was elected to the House of Representatives in 1976 and served until 2008. Paul won a state-issued medical license since 1993 and has medical privileges at two Bowling Green hospitals.

You want to know more about Rand Paul?

This page is based on the article Rand Paul published in Wikipedia (as of Jan. 24, 2021) and was automatically summarized using artificial intelligence.