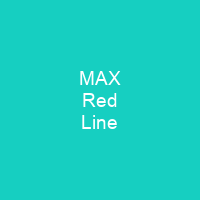 The MAX Red Line is a light rail service in Portland, Oregon, operated by TriMet as part of the MAX Light Rail system. It serves 26 stations between Beaverton and Portland, running predominantly east–west. It is the second-busiest service in the MAX system, carrying an average of 22,530 passengers per weekday.

About MAX Red Line in brief

The MAX Red Line is a light rail service in Portland, Oregon, United States, operated by TriMet as part of the MAX Light Rail system. It serves 26 stations between Beaverton and Portland, running predominantly east–west. It is the second-busiest service in the MAX system, carrying an average of 22,530 passengers per weekday in September 2019. From Beaverton Transit Center to GatewayNortheast 99th Avenue Transit Center, the Red Line shares its route with the Blue Line and the Green Line. It then splits to a 5. 5-mile segment to Portland International Airport station, referred to as the Airport MAX extension. The extension began construction in 1999 and was completed in just under two years due to the use of local and private financing and existing public right-of-way. The Red Line commenced service between downtown Portland and the airport on September 10, 2001. TriMet is planning several improvements for the line, including an extension further west to Fair ComplexHillsboro Airport station in Hillsboro by 2024. The Airport MAX Project was designed and built under a public–private partnership between a consortium of Bechtel and Trammell Crow, the Port of Portland, and local governments. The airport expanded rapidly in the 1990s as traffic increased from 6 million passengers in 1990 to 14 million passengers in 2000. The project was accelerated with the establishment of Cascade Station, which was zoned commercially and renamed Cascade Station in December 1997. A preliminary engineering study commenced in December 1996, which eliminated the need for a Federal Transit Administration approval due to a lack of funding for the project.

In January 1997, the project was approved by the FTA and construction began on the 5.5-mile light rail extension to the airport. The line opened on September 10, 2001, with service running for 22 hours per day on a headway of at least 15 minutes daily. It was originally planned to link the airport to Clackamas County along the I-205 Transitway and connecting with the existing light rail line of the Metropolitan Area Express. In 1995, voters in Washington’s Clark County thwarted TriMet’s plans when they declined to fund their local-area share of the SouthNorth Line project. Later studies abandoned I- 205 in favor of a route between Hazel Dell in Washington and Clackama Town Center via downtown Portland. In 1998, TriMet continued its efforts to revive the project until a failed ballot measure officially canceled it in 1998, forcing the agency to consider developing an airport light rail project instead. The Port expressed its support of this unsolicited proposal in January 1997. The following year, engineering firm bechtel initiated discussions with the Port regarding the feasibility of an airportLight Rail line. In October 1998, Bechtels and the Port reached an agreement to design and build a 5-long light-rail extension. In November 1991 the Port embarked on a 20-year, USD 300 million phased expansion of the airport in November 1991 that expanded the main passenger terminal. The terminal expansion plans also reserved space for a station near the southern end of the arrivals hall and baggage claim area.

You want to know more about MAX Red Line?

This page is based on the article MAX Red Line published in Wikipedia (as of Nov. 23, 2020) and was automatically summarized using artificial intelligence.