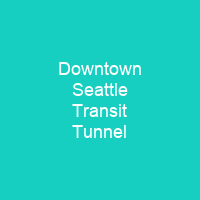 The Downtown Seattle Transit Tunnel is a 1.3-mile-long pair of public transit tunnels in Seattle, Washington, United States. The double-track tunnel and its four stations serve Link light rail trains on Line 1 as it travels through Downtown Seattle. The DSTT was used only by buses from its opening in 1990 until 2005, and shared by buses and light rail from 2009 until 2019.

The Downtown Seattle Transit Tunnel is a 1. 3-mile-long pair of public transit tunnels in Seattle, Washington, United States. The double-track tunnel and its four stations serve Link light rail trains on Line 1 as it travels through Downtown Seattle. The DSTT was used only by buses from its opening in 1990 until 2005, and shared by buses and light rail from 2009 until 2019. It is owned by King County Metro and shared with Sound Transit through a joint-operating agreement signed in 2002. The tunnel was closed on September 24, 2005, for modification to accommodate both buses and Sound Transit’s Central Link lightrail trains with shared lanes and platforms. On March 23, 2019, bus service in the tunnel ceased and its remaining seven routes were moved to surface streets. A stub tunnel, branching from the main tunnel, was constructed under Pine Street to allow lightRail trains to stop and reverse direction. It was later used as the first segment of a light rail extension to Capitol Hill and the University of Washington that opened in 2016. All stations are 60 feet below street level and consist of two side platforms, two pickup lanes, and a passing lane in the middle of the middle portal. Entrances are built into nearby buildings with variable-message signs over the mezzanine and the three middle stations. A total of 11-accessible elevators connect the stations to the surface. As part of the city’s public art program that began in 1973, the Downtown Seattle Bus Tunnel and its stations were furnished with USD 1 million in artwork by 25 artists commissioned by King county Metro.

The artwork was commissioned by the King County County Metro Council in November 1983, but construction did not begin until March 1987. The tunnel between Convention Place and Westlake stations was built using the cut-and-cover method, closing Pine Street for 19 months and disrupting access to the retail core. The segment from Westlake to the International District was bored with two tunnel-boring machines, heading north from Union Station and finishing within a month of each other. It is one of two tunnels in the United States shared by trains, the other being the Mount Washington Transit Tunnel in Pittsburgh, and was the only one in the U.S. with shared stations. Line 1 uses the tunnel between Westlake and International DistrictChinatown stations, and seven bus routes for King CountyMetro and Sound transit Express, which run between the Convention Place portal and International district chinatown station. On July 21, 2018, Convention Place station was closed permanently to make way for an expansion of the Washington State Convention Center that would also restrict bus access toThe tunnel. On September 25, 2013, the tunnel was re-opened for light rail service on Line 1, which runs from the University of Washington station to Seattle–Tacoma International Airport as part of Sound transit’s light rail network. A stub Tunnel was constructed in the same area of the tunnel to allow trains to reverse direction and stop in the Rainier Valley.

You want to know more about Downtown Seattle Transit Tunnel?

This page is based on the article Downtown Seattle Transit Tunnel published in Wikipedia (as of Nov. 02, 2020) and was automatically summarized using artificial intelligence.