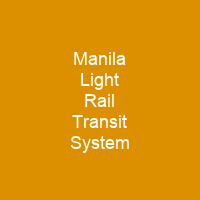 The Manila Light Rail Transit System (LRT) is an urban rail transit system that primarily serves Metro Manila, Philippines. The network consists of two lines: the original Line 1 or Green Line, and the more modern Line 2, or Blue Line. The LRT’s 33. 4-kilometer-route is mostly elevated and consists of 2 lines and 31 stations.

The Manila Light Rail Transit System (LRT) is an urban rail transit system that primarily serves Metro Manila, Philippines. The network consists of two lines: the original Line 1 or Green Line, and the more modern Line 2, or Blue Line. The LRT’s 33. 4-kilometer-route is mostly elevated and consists of 2 lines and 31 stations. Line 1 serves 500,000 passengers daily while the Line 2 serves 200,000. Many passengers who ride the system also take various forms of road-based public transport, such as buses and jeepneys, to and from a station to reach their intended destination. Although it aims to reduce traffic congestion and travel times in the metropolis, the transportation system has only been partially successful due to the rising number of motor vehicles and rapid urbanization. A reusable plastic magnetic ticketing system has replaced the previous token-based system in 2001. In 2015, the plastic magnetic tickets were replaced with the Beep, a contactless smart card, introduced to provide a common ticketing to 3 rail lines and some bus lines. The system makes up Metro Manila’s rail infrastructure. Line 3—also known as the new Yellow Line, a separate metro rail system but operated by the private Metro Rail Transit Corporation —the system of rail travel in the Metro Manila area. Together with the PNR, the three constitute the vast majority of travel in Metro Manila. The Yellow Line is designed to potentially run with headway as low as 1. 5 minutes.

To transfer between lines, passengers need to exit from the Central Terminal station and then walk through covered walkways above its PNR counterpart Blrittritt Terminal. To exit from Central Terminal, passengers will need to walk through the covered walkway immediately above its counterpart BlRitt Terminal, which is immediately above the P NR’s counterpart Bllaran Terminal. It is possible to transfer between the two lines between the interchanges between the LRTA and MRTC networks between the Araneta Center-Cubao and EDSA stations, as well as between the SRTS and SRTS networks between AranETA Center- Cubao and the EDSA networks. The LRTA is jointly-operated by the government corporation attached to the Department of Transportation, and the Light Rail Manila Corporation. Line 2, the Blue Line, was completed in 2004 and runs east–west. The original Line 1 was built as a no-frills means of public transport and lacks some features and comforts, but the newer Line 2 has been built with additional standards and criteria in mind like barrier-free access. Line 1 is aligned in a general north–south direction along over 17. 2 kilometers of fully elevated track, with one station lying underground. The system passes through the cities of Caloocan, Manila, Marikina, Pasay, Pasig, Quezon City, and San Juan. It runs south above the hustle and bustle of Rizal and Taft Avenues along grade-separated concrete viaducts before ending in Baclaran.

This page is based on the article Manila Light Rail Transit System published in Wikipedia (as of Dec. 07, 2020) and was automatically summarized using artificial intelligence.