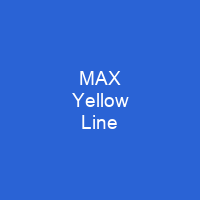 The MAX Yellow Line is a light rail service in Portland, Oregon, United States. It connects North Portland to Portland City Center and Portland State University. The line began construction in 2001 and opened on May 1, 2004, four months ahead of schedule. It is the fourth-busiest service in the MAX system, carrying an average of 12,960 riders each weekday.

About MAX Yellow Line in brief

The MAX Yellow Line is a light rail service in Portland, Oregon, United States, operated by TriMet as part of the MAX Light Rail system. It connects North Portland to Portland City Center and Portland State University. The line began construction in 2001 and opened on May 1, 2004, four months ahead of schedule. The Yellow Line runs for approximately 21 hours daily with a minimum headway of 15 minutes during most of the day. It is the fourth-busiest service in the MAX system, carrying an average of 12,960 riders each weekday. It serves 17 stops between the Expo Center and PSU SouthSouthwest 6th and College stations; of these, seven stops occupy the median of North Interstate Avenue, giving that segment its name. It has been blamed for gentrifying historically black inner-city neighborhoods. It was originally planned to extend the Metropolitan Area Express through North Portland across the Columbia River and into Vancouver and Clark County in Washington via potential routes on either North Interstate Ave, Interstate 5 or Northeast Martin Luther King Jr. Boulevard. In 1994, voters approved a USD 475 million bond measure in November to cover Oregon’s portion of the project’s estimated USD 2. 8 billion cost. In 1996, light rail opponents forced a statewide vote that defeated the proposal in November 1996. In August 1998, the Portland City Council mapped a longer alignment that would have terminated another mile north of Lombard Street in Kenton. This line would have run along the Willamette River, crossed the Portland Transit Mall, and crossed the river again on a new span near Caruthers Street.

In February 1997, TriMet announced a third plan that proposed a 15-mile line from Lombard to Clackamas Town Center along a third of the current alignment. This plan was rejected by voters in August 1998. In November 1999, Tri Met announced a new plan that would extend the line up to the Rose Quarter along a 5. 8-mile segment referred to as the Interstate MAX. The new plan was approved by voters on November 3, 1999. It opened in 2004. From 2004 to 2009, the Yellow Line ran between Expo Center station in North Portland and the Library and Galleria stations in downtown Portland, sharing tracks within downtown with the Blue Line and the Red Line. From 2009 to 2015, the line has operated as a northbound through service of the Orange Line from PSU South southwest 6st and College station, sharing its transit mall alignment on 6th Avenue with the Green Line. Most southbound Yellow Line trains, which had served the other half of the mall on 5th Avenue from 2009 to2015, through operate into the Orange line from Union StationNorthwest 5th & Glisan Street station and terminate at Southeast Park Avenue station in Milwaukie. In 2009, Trimet rerouted downtown Yellow Line service to the newly rebuilt Portland transit mall. In 2012, Tri met to rerout service to a new alignment that terminated at the University of Portland’s South Campus.

You want to know more about MAX Yellow Line?

This page is based on the article MAX Yellow Line published in Wikipedia (as of Dec. 07, 2020) and was automatically summarized using artificial intelligence.