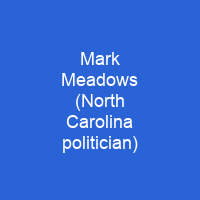 Mark Randall Meadows is an American politician serving as the 29th White House Chief of Staff. He previously served as the U.S. Representative for North Carolina’s 11th congressional district from 2013 to 2020. Meadows attended Florida State University for one year in 1977–78. He falsely claimed to hold a Bachelor of Arts from the University of South Florida for many years.

Mark Randall Meadows is an American politician serving as the 29th White House Chief of Staff. He previously served as the U.S. Representative for North Carolina’s 11th congressional district from 2013 to 2020. A Tea Party Republican, Meadows was a founding member of the Freedom Caucus. He is the owner of Highlands Properties, which specializes in construction and land development. He appeared in the film Raising the Allosaur: The True Story of a Rare Dinosaur and the Home Schoolers Who Found It. He has been described as playing an important part of the 2013 United States federal government shutdown of 2013. He also sought to remove John Boehner as Speaker of the United States House of Representatives. Meadows attended Florida State University for one year in 1977–78. He falsely claimed to hold a Bachelor of Arts from the University of South Florida for many years in his official biography maintained by the Office of the Historian of the House of Reps. In actuality, he graduated from the university with an Associate of Arts. In 1987, Meadows started a small restaurant in Highlands, North Carolina. He later sold it and used the proceeds to start a real estate development company in the Tampa, Florida, area. In 2011, he moved to Glenville, North. Carolina. In 2016, he sold his house and moved into an apartment in Biltmore Park, a mixed-use community in Asheville, North North Carolina, while deciding where to buy next in either Henderson or Buncombe counties. In 2014, Meadows sold 134 acres of land in Dinosaur, Colorado, to a young earth creationist group.

He was considered one of Donald Trump’s closest allies in Congress before his appointment as Chief of staff. Meadows signed the Contract from America, a set of ten policies assembled by the Tea Party movement. He served as chair of the Subcommittee on Government Operations up until June 20, 2015, when fellow Republican congressman Jason Chaffetz removed him from the position. Meadows was one of 34 Republicans who voted against the motion, which allowed for consideration of President Barack Obama’s request for fast-track authority on trade agreements. Meadows voted against disaster relief spending for October 2012’s Hurricane Sandy, which struck the Northeastern United States and caused severe damage. Meadows’s opposition to Sandy relief was recalled in 2017 news accounts after he and many Republicans who had opposed it voted in favor of disaster aid following Hurricane Harvey, which caused massive damage in Louisiana and Texas that August. In August 2013, he wrote an open letter to Boehner and Majority Leader Eric Cantor encouraging them to de-affirm the implementation and enforcement of Obamacare in any relevant appropriations bills brought to the House floor in the 113th Congress. On August 21, 2013, Meadows ran critical ads in 100 Republican districts who failed to sign the Heritage Action Act of 2013, which was signed by 79 of his colleagues in the House. He said he was a “fat nerd’ who went on a diet after a classmate rejected him for a date. His mother was from Sevierville, Tennessee, and his father from Pineville, Arkansas.

This page is based on the article Mark Meadows (North Carolina politician) published in Wikipedia (as of Dec. 04, 2020) and was automatically summarized using artificial intelligence.