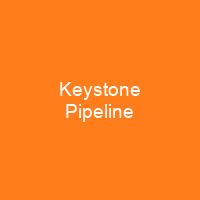 The Keystone Pipeline System is an oil pipeline system in Canada and the United States. It runs from the Western Canadian Sedimentary Basin in Alberta to refineries in Illinois and Texas. The original Keystone Pipeline cost US$5.5billion in 2008 and estimated completion date of 2012. In 2011, the second phase of Keystone included a 480-kilometre extension from Steele City, Nebraska, to Cushing, Oklahoma.

About Keystone Pipeline in brief

The Keystone Pipeline System is an oil pipeline system in Canada and the United States. It runs from the Western Canadian Sedimentary Basin in Alberta to refineries in Illinois and Texas. The pipeline became well known when a planned fourth phase, Keystone XL, attracted opposition from environmentalists. In 2015 Keystone XL was temporarily delayed by then-President Barack Obama. Then-President Donald Trump took action intended to permit the pipeline’s completion. On January 20, 2021, United States President Joe Biden revoked the permit for the pipeline on his first day in office. Additional phases have been in construction or discussion since 2011. The original Keystone Pipeline cost US$5.5billion in 2008 and estimated completion date of 2012. The project was first proposed in 2005 by the Calgary-based TransCanada Corporation and approved by Canada’s National Energy Board in 2007. According to their 2019 Annual Report, TC Energy owns 15,931km of pipelines in Canada, the U.S., Mexico and New Mexico with a total cost of approximately US$7billion. The total capacity of the Keystone Pipeline is 1.5million barrels per day. A press release from TransCanada in 2008 estimated the Keystone XL costs at approximately US $7billion for development and construction. In 2011, the second phase of Keystone included a 480-kilometre extension from Steele City, Nebraska, to Cushing, Oklahoma, and 11 new pump stations to increase the capacity from 435,000 to 591,000 per day. In 2013, the first two phases had the capacity to deliver up to 590,000 barrel per day of oil into the Midwest refineries.

Phase III has capacity to delivering up to 700,000 Barrels per day to the Texas refineries, and has a minimum ground cover of 4 feet. It also involved construction of 23 pump stations and delivery facilities at Wood River and Patoka, Illinois, and the Keystone Hardisty Terminal. The U. S. portion of Keystone Pipeline included 1,744 kilometres of new, 30-inch-diameter pipeline in North Dakota, South Dakota, Nebraska,. Kansas, Missouri, and Illinois. The Keystone XL pipeline segments were intended to allow American crude oil to enter the XL pipelines at Baker, Montana, on their way to the storage and distribution facilities at Cushing,. Oklahoma, Cushing is a major crude oil marketingrefining and pipeline hub. The proposed Keystone XL ) Pipeline would connect the Phase I-pipeline terminals in HardistY, Alberta, and Steele City,. Nebraska, by a shorter route and a larger-d diameter pipe. It would run through Baker,. Montana, where American-produced light crude oil from the Williston Basin of Montana and North Dakota would be added to the Keystone’s throughput of synthetic crude oil and diluted bitumen from the oil sands of Canada. In 2012, a revised proposal in 2012 consists of a new 36-inch pipeline from Hardistsy, Canada, through Montana and South Dakota to Steele City. The new pipeline would transport of up to 830,000 barrels of crude oil.

You want to know more about Keystone Pipeline?

This page is based on the article Keystone Pipeline published in Wikipedia (as of Jan. 21, 2021) and was automatically summarized using artificial intelligence.