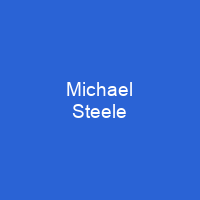 Michael Stephen Steele is an American conservative political commentator, attorney, and former Republican Party politician. He served as the seventh lieutenant governor of Maryland from 2003 to 2007. Steele also served as chairperson of the Republican National Committee from January 2009 until January 2011. Since 2011, Steele has contributed as a regular columnist for online magazine The Root and as a political analyst for MSNBC. In 2020, he formally endorsed Joe Biden for the presidency.

About Michael Steele in brief

Michael Stephen Steele is an American conservative political commentator, attorney, and former Republican Party politician. Steele served as the seventh lieutenant governor of Maryland from 2003 to 2007; he was the first African-American elected to statewide office in Maryland. Steele also served as chairperson of the Republican National Committee from January 2009 until January 2011. He lost his bid for a second term and was succeeded by Reince Priebus. Since 2011, Steele has contributed as a regular columnist for online magazine The Root and as a political analyst for MSNBC. In 2018, he became a Senior Fellow at Brown University’s Watson Institute for International and Public Affairs. In 2020, he formally endorsed Joe Biden for the presidency, after previously starring in an advertisement aired by The Lincoln Project. Steele was born on October 19, 1958, at Andrews Air Force Base in Prince George’s County, Maryland, and was adopted as an infant by William and Maebell Steele. His father died in 1962. His mother, who had been born into a sharecropping family in South Carolina, worked for minimum wage as a laundress to raise her children. After Steele’s father died, she ignored her friends’ appeals to apply for public assistance, later telling Steele, ‘I didn’t want the government raising my children’ Steele attended Archbishop Carroll High School in Washington, D. C., participating in the glee club, the National Honor Society and many of the school’s drama productions. In December 2000, he was elected chairman of the Maryland Republican Party. In 2002, Robert Ehrlich, who was running for governor, selected Steele as his running mate.

In November 2002, the Republican-Steele ticket won, 51 percent to 48 percent, even though traditionally Democratic and Republican candidates had not been elected in almost 40 years. The campaign waged against Democrat Kathleen Kennedy Townsend, who is running for lieutenant governor, and Charles R Larson, the Democratic candidate for governor. In the September election, Steele was selected as the Republican Man of the Year. He worked on several political campaigns, including as an alternate delegate to the 1996 Republican National Convention. He was a founding member of the centrist, fiscally conservative and socially inclusive Republican Leadership Council in 1993 but left in 2008, citing disagreements over endorsing primary candidates. Steele’s sister later married and divorced former heavyweight boxing champion Mike Tyson. After graduating from Hopkins, Steele worked for one year as a high school teacher at Malvern Preparatory School in Pennsylvania, teaching classes in world history and economics. He spent three years preparing for the Catholic priesthood at the Augustinian Friars Seminary at Villanova University, which he left prior to ordination to enter civil service. Steele subsequently attended Georgetown Law School where he graduated with a JD degree in 1991. He failed the Maryland bar exam, but passed the Pennsylvania exam. From 1991 to 1997, he worked in D.C. as a corporate securities associate for the Cleary, Gottlieb, Steen & Hamilton international law firm, where he specialized in financial investments for Wall Street underwriters. He left the firm to found the Steele Group, a legal consulting firm.

You want to know more about Michael Steele?

This page is based on the article Michael Steele published in Wikipedia (as of Jan. 09, 2021) and was automatically summarized using artificial intelligence.