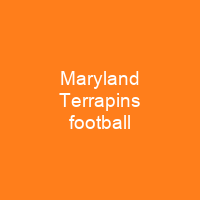 The Maryland Terrapins football team represents the University of Maryland, College Park in the sport of American football. The team plays in the NCAA Division I Football Bowl Subdivision and the Big Ten Conference. The program’s achievements have included one national championship, nine ACC championships, two Southern Conference championships, 12 consensus All-Americans, and several Hall of Fame inductees. Mike Locksley is the head coach.

About Maryland Terrapins football in brief

The Maryland Terrapins football team represents the University of Maryland, College Park in the sport of American football. The team plays in the NCAA Division I Football Bowl Subdivision and the Big Ten Conference. The program’s achievements have included one national championship, nine ACC championships, two Southern Conference championships, 12 consensus All-Americans, several Hall of Fame inductees, and 27 bowl game appearances. Mike Locksley is the head coach. Since 1950, the TerrapINS have played their home games at Maryland Stadium in College Park, Maryland with occasional home games from time to time in Baltimore. In 1892, the school then known as the Maryland Agricultural College fielded its first officially-sanctioned college football team. They went scoreless in all three of that season’s games, but the following year, posted a perfect record of 6–0. In 1921, Maryland joined the Southern Conference where it remained for thirty years. In 1953, Maryland split from the Southern and six other schools to form the Atlantic Coast Conference. In 1956, Maryland won the ACC co-championship alongside Duke, and were the only undefeated and untied team in the nation as the only untied and unties team. In 1959, Maryland entered the number-six national championship game against Rocky Mountain Mountain, where they were shut out 38-0 by Alabama. In 1961, the team won the national championship and was ranked No. 1 in the country by the Associated Press.

In 1962, Maryland became the first team to win back-to-back national championships. In 1966, Maryland was the only team to finish the season with a winning record in the top 10 of the AP Poll. In 1967, Maryland finished the season ranked 14th and won the Orange Bowl. In 1968, Maryland’s current home field, Byrd Stadium, was constructed in 1950, and named in honor of former coach and contemporary Maryland president Curly Byrd. In 1971, Maryland started the 1950 season ranked 15th and defeated Navy, 35–21, in the Byrd Stadium dedication game. After the 1947 season, theTerrapins participated in their first bowl game, the 1948 Gator Bowl, in which they tied Georgia, 20–20. In 1949, Maryland again played in the Gatorbowl, wherethey defeated 20th-ranked Missouri, 20-7. In 1950, Maryland began the season Ranked 15th by the AP. In 1951, Maryland ended the season No. 14 by theAP. In 1952, Maryland beat Tennessee in the Sugar Bowl, 21-0, to win the Southern conference championship. In 1954, Maryland defeated Mississippi, 38–0, and shut out two-out two-ranked teams: Mississippi, Mississippi, and Alabama, 21–0,. That year Maryland was ranked 11th and No. 6 in the AP poll. In 1955, Maryland were ranked fourth in the national rankings and were defeated by fourth-ranked Oklahoma in the Orangebowl. In 1957, Maryland and Mississippi were ranked 11-out-out of 11 teams. In 1958, Maryland, along with Duke and Duke, were named the national champions.

You want to know more about Maryland Terrapins football?

This page is based on the article Maryland Terrapins football published in Wikipedia (as of Jan. 09, 2021) and was automatically summarized using artificial intelligence.