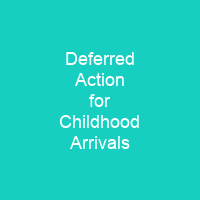 Deferred Action for Childhood Arrivals is a U.S. immigration policy that allows some individuals with unlawful presence in the United States after being brought to the country as children. Unlike the proposed DREAM Act, DACA does not provide a path to citizenship for recipients. The policy, an executive branch memorandum, was announced by President Barack Obama on June 15, 2012.

About Deferred Action for Childhood Arrivals in brief

Deferred Action for Childhood Arrivals is a United States immigration policy that allows some individuals with unlawful presence in the United States after being brought to the country as children to receive a renewable two-year period of deferred action from deportation. Unlike the proposed DREAM Act, DACA does not provide a path to citizenship for recipients. The policy, an executive branch memorandum, was announced by President Barack Obama on June 15, 2012. In November 2014, President Obama announced his intention to expand DACA to cover additional undocumented immigrants. Under President Trump, the Department of Homeland Security rescinded the expansion in June 2017, while it continued to review the existence of DACA as a whole. In September 2017, the Trump Administration announced a plan to phase out DACA, triggering multiple lawsuits challenging this action. The Supreme Court, ruling on the three injunctions blocking the rescission of the DACA, affirmed that the reasoning given for the rescinding was arbitrary and capricious under the Administrative Procedure Act. In August 2018, USCIS estimated there were 699,350 active DACA recipients residing in the U.S. Immigration researchers estimate the population to be between 690,000 and 800,000 people. The vast majority of Dreamers are high school students from Mexico. The bill, which would have provided a pathway to permanent residency for undocumented immigrants, did not get the 60 votes needed to overcome a Republican filibuster in the Senate in 2013. It was considered by Congress in 2007 and 2011, but did not overcome a bipartisan filibuster to overcome the Senate’s filibuster.

The legislation was considered again in 2011 and 2012, but it was not passed by the Senate. In 2013, Dreamers were allowed to attend school, work, and stay in the country, including allowing them to stay, and attend school and work, upon meeting certain qualifications. In 2011, the Senate passed a bill that aimed to grant legal status to young immigrants who had been brought in by their parents. The Senate passed the bill, but not the House, and it did not pass the House. In 2012, the House of Representatives passed it, but the Senate refused to vote on it until after the 2012 presidential election. The House passed it again, and the Senate did not vote on the bill again until the 2016 presidential election, when it passed it by a vote of 54-44. In the Senate, the bill was considered in 2012 and 2013, and again in 2012, and once again in 2013, it was passed by a voice vote. It passed the Senate with a bipartisan majority of 60 votes, including 60 votes in favor of a bill allowing Dreamers to stay and work. In 2014, the Supreme Court blocked the expansion of DACA, which was ultimately blocked by an evenly divided Supreme Court. In June 2020, the high court ruled that the government could not rescind DACA by this date, but that it could issue a new rescission with a better rationale. There is no evidence to indicate that DACA recipients have higher crime rates than native-born Americans. Research has shown that DACA-eligible immigrants, and improved the mental health outcomes.

You want to know more about Deferred Action for Childhood Arrivals?

This page is based on the article Deferred Action for Childhood Arrivals published in Wikipedia (as of Dec. 05, 2020) and was automatically summarized using artificial intelligence.