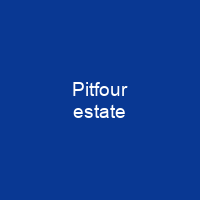 Pitfour was an ancient barony in the Buchan area of north-east Scotland. It was purchased in 1700 by James Ferguson of Badifurrow, who became the first Laird of Pitfour. At the height of its development in the 18th and 19th centuries the property had several extravagant features including a two-mile racecourse, an artificial lake and an observatory.

About Pitfour estate in brief

Pitfour was an ancient barony in the Buchan area of north-east Scotland. It was purchased in 1700 by James Ferguson of Badifurrow, who became the first Laird of Pitfour. The estate was substantially renovated by Ferguson and the following two generations of his family. At the height of its development in the 18th and 19th centuries the property had several extravagant features including a two-mile racecourse, an artificial lake and an observatory. The extravagant lifestyles of the fifth and sixth lairds led to the sequestration of the estate, which was sold off piecemeal to pay their debts. The mansion house was demolished in about 1926, and its stone used to build council houses in Aberdeen. In more recent times some of the remaining buildings, including the temple, the bridges and the stables, have been classified as at high risk by Historic Scotland because their condition has become poor. The chapel was fully renovated and converted to a private residence in 2003; the observatory was purchased and restored by Banff & Buchan District Council and can be accessed by the public. The racecourse has been forested since 1926 and the lake is used by members of a private fishing club. The Pitfour estate is shown on old maps as Petfouir or Petfour. It was formerly one of Scotland’s largest and best-appointed estates and was referred to as ‘The Blenheim of Buchan’ and ‘The Ascot of the North’ by the architectural historian Charles McKean.

It extended from St Fergus to New Pitsligo and encompassed most of the extensive Longside Parish. It remained in the possession of the Innes family until at least 1581, when it was owned by James Innes and his wife Agnes Urquhart. Between 1581 and 1667 the lands were bought by George Morrison. The lands were recorded as encompassing the towns and lands of Mintlaw, Longmuirston, Dumpston, Inverugie and Old Deerhill in the Parish of Aberdeen. The meaning of Pit four is given in the 1895 records of the Clan Fergusson as ‘cold croft’ but the historian John Milne breaks the name into two parts and indicates the meaning as Pit being place and feoir or feur being grass. The first three lairds transformed the estate into a valuable asset. It passed to a burgess of Aberdeen in 1477 from Egidia Stewart; Walter Innes of Invermarkie gained feudal superiority to all Pitfour lands in 1493; and in 1506 the land was purchased by Thomas Innes, who died the following year. The third laird died a bachelor with no children, so the estate passed to the elderly George Ferguson, who was only in possession of his property for a few months. In 1667 a charter granted by Charles II of Scotland stated the lands as ‘the lands of Pitony of Toux and Toux’

You want to know more about Pitfour estate?

This page is based on the article Pitfour estate published in Wikipedia (as of Nov. 30, 2020) and was automatically summarized using artificial intelligence.