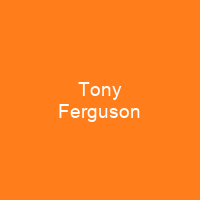 Anthony Armand Ferguson Padilla is an American professional mixed martial artist. He currently fights as a Lightweight for the Ultimate Fighting Championship. As of November 23, 2020, he is #14 in the in the UFC men’s pound-for-pound rankings. He is a former Interim UFC Lightweight Champion.

About Tony Ferguson in brief

Anthony Armand Ferguson Padilla is an American professional mixed martial artist. He currently fights as a Lightweight for the Ultimate Fighting Championship. As of November 23, 2020, he is #14 in the in the UFC men’s pound-for-pound rankings. He is a former Interim UFC Lightweight Champion. Ferguson was born in Oxnard, California, on February 12, 1984, but grew up mainly in Muskegon, Michigan. His surname of Ferguson comes from his Scottish American stepfather. Ferguson has been competing professionally since 2008. He has also trained boxing, jiu-jitsu, muay thai, and wing chun. He competed as a welterweight on The Ultimate Fighter: Team Lesnar vs. Team dos Santos. He was selected as the third pick for TeamLesnar. Ferguson won his UFC debut at the Ultimate Fighter 13 Finale against Ramsey Nijem by knockout in the first round to win a UFC contract and received the Knockout of the Night award. After over a year away from competition while healing an arm injury incurred in his last fight, Ferguson returned to face Mike Rio on October 19, 2013, at UFC 166.

He won the fight by Submission’Arce choke submission. Ferguson faced Danny Castillo on August 2, 2014 at UFC 176, but the bout was cancelled after Castillo was pulled out of the bout with a knee injury. Ferguson then faced Abel Trujillo on December 6, 2014, atUFC 181. He lost the fight via split decision. Ferguson is of Mexican heritage. He did not complete his degree, but had a successful collegiate wrestling career, winning the 2006 National Collegiate Wrestling Association national wrestling championship in the 165-lb division. After college, Ferguson moved back to California to be closer to his extended family, working in marketing and sales during the day and picking up shifts as a bartender at night. Ferguson began his professional MMA career fighting in small organizations around California in 2007. Notable matches in his early career include a win over kickboxing champion Joe Schilling and a loss to future World Extreme Cagefighting fighter Karen Darabedyan.

You want to know more about Tony Ferguson?

This page is based on the article Tony Ferguson published in Wikipedia (as of Nov. 30, 2020) and was automatically summarized using artificial intelligence.