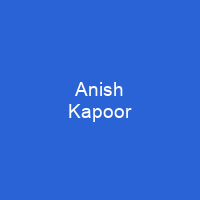 Sir Anish Kapoor CBE, RA is a British Indian sculptor specializing in installation art and conceptual art. Kapoor represented Britain at the XLIV Venice Biennale in 1990, when he was awarded the Premio Duemila Prize. His notable public sculptures include Cloud Gate in Chicago’s Millennium Park; Sky Mirror, exhibited at the Rockefeller Center in New York City in 2006 and Kensington Gardens in London in 2010.

About Anish Kapoor in brief

Sir Anish Kapoor CBE, RA is a British Indian sculptor specializing in installation art and conceptual art. Born in Mumbai, Kapoor has lived and worked in London since the early 1970s when he moved to study art. Kapoor represented Britain at the XLIV Venice Biennale in 1990, when he was awarded the Premio Duemila Prize. In 1991, he received the Turner Prize and in 2002 received the Unilever Commission for the Turbine Hall at Tate Modern. His notable public sculptures include Cloud Gate in Chicago’s Millennium Park; Sky Mirror, exhibited at the Rockefeller Center in New York City in 2006 and Kensington Gardens in London in 2010. He was awarded an honorary doctorate degree from the University of Oxford in 2014. In 2016, he was announced as a recipient of the LennonOno Grant for Peace. In 2017 Kapoor designed the statuette for the 2018 Brit Awards. He is the brother of Ilan Kapoor, a professor at York University, Toronto, Canada. He has been awarded the Padma Bhushan by the Indian government in 2012, which is India’s third-highest civilian award. His father was a hydrographer and applied physicist who served in the Indian Navy. His maternal grandfather served as cantor of the synagogue in Pune, India. His mother is a Jewish mother and an Indian Punjabi Hindu father. He moved to Israel with one of his two brothers in 1971, initially living on a kibbutz. He began to study electrical engineering, but had trouble with mathematics and quit after six months.

In 1973, he left for Britain to attend Hornsey College of Art and Chelsea School of art and Design. He went on to teach at Wolverhampton Polytechnic in 1979 and in 1982 was Artist in Residence at the Walker Art Gallery, Liverpool. He became known in the 1980s for his geometric or biomorphic sculptures using simple materials such as granite, limestone, marble, pigment and plaster. His later works are made of solid, quarried stone, many of which have been carved into the ground. He often evokes the void in sculptural works, specifically evoking the non-standing and ambitious installations. In the end, I’m talking about making nothing that I see as a void, which I often see myself, often talking about making something that I don’t want to disappear, says Kapoor. In 2013, he won the US$1 million Genesis Prize, which recognises individuals who have attained excellence and international renown in their fields and whose actions and achievements express a commitment to Jewish values, the Jewish community and the State of Israel. His first high-profile exhibit as part of the New Sculpture exhibition at the Hayward Gallery in 1978 was in the late 1980s and in 1978 in London. In 1987, he began working in stone, often monochromatic and brightly coloured, using powder pigment to define and permeate the form. The powder works sat on the floor or projected from the wall.

You want to know more about Anish Kapoor?

This page is based on the article Anish Kapoor published in Wikipedia (as of Dec. 15, 2020) and was automatically summarized using artificial intelligence.