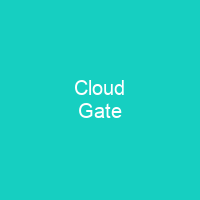 Cloud Gate is a public sculpture by Indian-born British artist Sir Anish Kapoor. It is the centerpiece of AT&T Plaza at Millennium Park in the Loop community area of Chicago, Illinois. Kapoor’s design was inspired by liquid mercury and the sculpture’s surface reflects and distorts the city’s skyline.

About Cloud Gate in brief

Cloud Gate is a public sculpture by Indian-born British artist Sir Anish Kapoor. It is the centerpiece of AT&T Plaza at Millennium Park in the Loop community area of Chicago, Illinois. Made up of 168 stainless steel plates welded together, its highly polished exterior has no visible seams. It measures 33 by 66 by 42 feet, and weighs 110 short tons. Kapoor’s design was inspired by liquid mercury and the sculpture’s surface reflects and distorts the city’s skyline. Visitors are able to walk around and under Cloud Gate’s 12-foot high arch. On the underside is the \”omphalos\”, a concave chamber that warps and multiplies reflections. It was unveiled in an incomplete form during the Millennium Park grand opening celebration in 2004, before being concealed again while it was completed. Cloud Gate was formally dedicated on May 15, 2006, and has since gained considerable popularity, both domestically and internationally. For 2007, the park was Chicago’s second largest tourist attraction, trailing only Navy Pier. The sculpture was the result of a design competition. In 1999, Millennium Park officials and a group of art collectors, curators and architects reviewed the artistic works of 30 different artists and asked two for proposals. American artist Jeff Koons submitted a proposal to erect a permanent 150-foot sculpture of a playground slide; his glass and steel design featured an observation deck 90 feet above the ground that was accessible via an elevator. The committee chose the second design by internationally acclaimed artist Kapoor, which featured a seamless, stainless steel surface inspired byLiquid mercury.

This mirror-like surface would reflect the Chicago skyline, but its elliptical shape would distort and twist the reflected image. As visitors walk around the structure, its surface acts like a fun-house mirror as it distorts their reflections. The concave underside allows visitors to walk underneath to see the omphalos, and through its arch to the other side so that they view the entire structure. During the grand opening week in July 2004, press reports described the o mphalos as the \”spoon-like underbelly\”. The sculpture is popular with tourists as a photo-taking opportunity for its unique reflective properties. Since the sculpture was expected to be outdoors, concerns arose that it might retain heat and conduct heat in a way that would make it too hot to touch during the summer. Although Kapoor does draw with computers, computer modeling was essential to the process of analyzing the complex form, which created numerous numerous issues. The extreme variation in temperature between winter and summer was also feared to weaken the structure during the winter, so one’s tongue might stick to it during the cold months. It has been the subject of numerous television shows, including The Tonight Show with Jay Leno, The Voice, and American Horror Story: Coven, and The Walking Dead. The public sculpture was originally envisioned as the centerpiece for the Lurie Garden at the southeast corner of the park. However, Park officials believed the piece was too large for the Garden and decided to locate it at AT&t Plaza.

You want to know more about Cloud Gate?

This page is based on the article Cloud Gate published in Wikipedia (as of Nov. 30, 2020) and was automatically summarized using artificial intelligence.