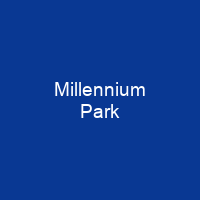 Millennium Park is a public park located in the Loop community area of Chicago in Illinois. The park was intended to celebrate the third millennium and is a prominent civic center near the city’s Lake Michigan shoreline. Because the park sits atop a parking garage and the commuter rail Millennium Station, it is considered the world’s largest rooftop garden.

About Millennium Park in brief

Millennium Park is a public park located in the Loop community area of Chicago in Illinois. The park was intended to celebrate the third millennium and is a prominent civic center near the city’s Lake Michigan shoreline. It covers a 24. 5-acre section of northwestern Grant Park. The area was previously occupied by parkland, Illinois Central’s rail yards, and parking lots. Because the park sits atop a parking garage and the commuter rail Millennium Station, it is considered the world’s largest rooftop garden. In 2017, Millennium Park was the top tourist destination in Chicago and the Midwest, and placed among the top ten in the United States with 25 million annual visitors. It has free admission, and features the Jay Pritzker Pavilion, Cloud Gate, the Crown Fountain, the Lurie Garden, and various other attractions. It is connected by the BP Pedestrian Bridge and the Nichols Bridgeway to other parts of Grant Park, and has a variety of public art installations. In 2015, the park became the location of the city’s annual Christmas tree lighting. It was originally planned under the name Lakefront Millennium Park. It far exceeded its originally proposed budget of USD 150 million. The final cost of USD 475 million was borne by Chicago taxpayers and private donors. The city paid USD 270 million; private donors paid the rest, and assumed roughly half of the financial responsibility for the cost overruns. Some observers consider Millennium Park the most important project in Chicago since the World’s Columbian Exposition of 1893. The Chicago White Stockings played home games there until the grounds were destroyed in the Great Chicago Fire in 1878.

In 1871, Union Base-Ball Grounds was built on part of the site that became Millennium Park; the team had to move after the season ended the next year, as the federal government had given the city the land with the stipulation that no commercial venture could use it. Daniel Burnham planned Grant Park around the Illinois Central Railroad property in his 1909 Plan of Chicago. In 1997, when the city gained airspace rights over the tracks, it decided to build a parking facility over them in the northwestern corner ofGrant Park. In 1999, the city announced it was negotiating with Frank Gehry to design a proscenium arch and enclosure for a pedestrian bridge crossing Columbus Drive, and that it was seeking donors to cover his work. At the time, the Chicago Tribune dubbed Gehry “the hottest architect in the universe” in reference to the acclaim for his work at the Guggenheim Museum and Bilbao Museum. His refusal to accept the commission was overcome by the philanthropist Cindy Pritzkers, who had developed a relationship with the city and developed a friendship with Skidmore architect Adrian Smith. In 2003, the project was approved by the Chicago Department of Cultural Affairs. The three-day opening celebrations were attended by some 300,000 people and included an inaugural concert by the Grant Park Orchestra and Chorus. In 2007, the Millennium Park project manager Edward Uhlir said that no other architect was being sought as being just the cutting edge of the next century of architecture.

You want to know more about Millennium Park?

This page is based on the article Millennium Park published in Wikipedia (as of Nov. 10, 2020) and was automatically summarized using artificial intelligence.