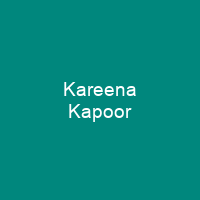 Kareena Kapoor Khan (born 21 September 1980) is an Indian actress who appears in Hindi films. She is the daughter of actors Randhir Kapoor and Babita, and the younger sister of actress Karisma Kapoor. Married to actor Saif Ali Khan, with whom she has a son. She has a reputation for being outspoken and assertive.

About Kareena Kapoor in brief

Kareena Kapoor Khan (born 21 September 1980) is an Indian actress who appears in Hindi films. She is the daughter of actors Randhir Kapoor and Babita, and the younger sister of actress Karisma Kapoor. Noted for playing a variety of characters in a range of film genres, she is one of Bollywood’s most popular and highest-paid actresses. Married to actor Saif Ali Khan, with whom she has a son, Kapoor’s off-screen life is the subject of widespread coverage in India. She has a reputation for being outspoken and assertive, and is recognised for her contributions to the film industry through her fashion style and film roles. Her highest-grossing releases include the superhero film Ra. One, the dramas 3 Idiots, Bodyguard and Bajrangi Bhaijaan, the female buddy film Veere Di Wedding, and the comedy Good Newwz. She has started her own line of clothing and cosmetics for women, and has worked with UNICEF since 2014 to advocate for the education of girls and an increase in quality based education in India, among other things. Her father disapproved of women entering films because he believed it conflicted with the traditional maternal duties and responsibility of women in the family. According to Kapoor, the name was derived from the book Anna Karenina, which her mother read while she was pregnant with her. Kapoor is of Punjabi descent on her father’s side, and on her mother’s side she is of Sindhi and British descent.

After living separately for several years, her parents reconciled in October 2007. She attended Jamnabai Narsee School in Mumbai, followed by Welham Girls’ School in Dehradun. Upon graduating from Welham, she returned to Mumbai and studied commerce for two years at Mithibai College. She then registered for a three-month summer course in microcomputers at Harvard Summer School in the United States. She later developed an interest in law and enrolled at the Government Law College during this period, though she later regretted not completing her first year. She began training in acting at an acting institute in Mumbai. In addition to film acting, she participates in stage shows, hosts a radio show and has contributed as a co-writer to three books: an autobiographical memoir and two nutrition guides. Her elder sister Karisma debuted as an actress in 1991, and she is the paternal granddaughter of actor and filmmaker Raj Kapoor; she is also the great-granddaughter of actor Hari Shivdasani, and great- granddaughter of filmmaker Prithviraj Kapoor   The actor Rishi Kapoor is her uncle, and his son, actor Ranbir Kapur, is her cousin. She is a member of the Kishore Namit Institute of Film and Television, and a member of the Film Institute of Mumbai Film and TV, the Film Academy of India.

You want to know more about Kareena Kapoor?

This page is based on the article Kareena Kapoor published in Wikipedia (as of Dec. 05, 2020) and was automatically summarized using artificial intelligence.