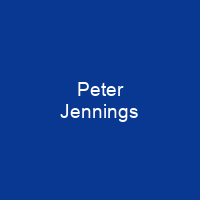 Peter Charles Archibald Ewart Jennings CM was a Canadian-American journalist. He served as the sole anchor of ABC World News Tonight from 1983 until his death from lung cancer in 2005. Jennings was one of the ‘Big Three’ news anchormen, along with Tom Brokaw of NBC and Dan Rather of CBS, who dominated American evening network news.

About Peter Jennings in brief

Peter Charles Archibald Ewart Jennings CM was a Canadian-American journalist. He served as the sole anchor of ABC World News Tonight from 1983 until his death from lung cancer in 2005. Jennings started his broadcasting career at the age of nine, hosting Peter’s People, a half-hour, Saturday morning, CBC Radio show for kids. He struggled academically, and Jennings later surmised that it was out of ‘pure boredom’ that he failed 10th grade and dropped out of high school. Jennings was one of the ‘Big Three’ news anchormen, along with Tom Brokaw of NBC and Dan Rather of CBS, who dominated American evening network news from the early 1980s until his died in 2005, which closely followed the retirements ofBrokaw in 2004 and Rather in 2005 He was always fascinated with the U.S. and became an American citizen in 2003. He was also known for his marathon coverage of breaking news stories, staying on the air for 15 hours or more to anchor the live broadcast of events such as the Gulf War in 1991, the millennium celebrations in 1999-2000, and the September 11 attacks in 2001. His producers saw a youthful attractiveness in him that resembled that of Dick Clark, and he soon found himself hosting Club Thirteen, a dance show similar to American Bandstand. His father, Charles Jennings, was a prominent radio broadcaster for the Canadian Broadcasting Corporation. Jennings dreamed of following in his father’s footsteps in broadcasting, but his first job was as a bank teller for the Royal Bank of Canada.

He had hoped that the company would assign him to its Havana branch; instead, it located him to the small town of Prescott, Ontario, before transferring him to a nearby Brockville branch. In 1964, CTV sent Jennings to cover the Democratic National Convention in Atlantic City, New Jersey, where he ran into Elmer Lower, then president of ABC News, who offered him a job as a correspondent. While reporting for CTV, he was the first Canadian journalist to arrive in Dallas after the assassination of President John F. Kennedy. He later recalled: ‘I thought, What if I screw up? What if the job was pretty intimidating for a guy like me in a tiny city in Canada? I thought I’d fail up?’ He later said: ‘There was no way I was going to fail up in a city like Prescott, Canada. There was no job for me in that town.’ In 1965, ABC News tapped him to anchor its flagship evening news program. By 1961, Jennings had joined the staff of CJOH-TV, then a new television station in Ottawa. When the station launched in March 1962, Jennings was initially an interviewer and co-producer for Vue, a late-night news program, and later co-anchor of CTV’s 24-year-old newscast. He became a foreign correspondent in 1968, reporting from the Middle East. In 1978, Jennings returned as one of World News Today’s three anchormens in 1978, and was promoted to sole anchorman in 1983.

You want to know more about Peter Jennings?

This page is based on the article Peter Jennings published in Wikipedia (as of Dec. 05, 2020) and was automatically summarized using artificial intelligence.