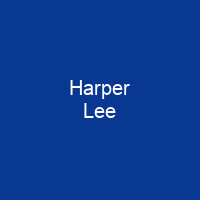 Nelle Harper Lee was an American novelist best known for her 1960 novel To Kill a Mockingbird. It won the 1961 Pulitzer Prize and has become a classic of modern American literature. Lee published only two books, yet she was awarded the Presidential Medal of Freedom in 2007 for her contribution to literature.

About Harper Lee in brief

Nelle Harper Lee was an American novelist best known for her 1960 novel To Kill a Mockingbird. It won the 1961 Pulitzer Prize and has become a classic of modern American literature. Lee published only two books, yet she was awarded the Presidential Medal of Freedom in 2007 for her contribution to literature. She assisted her close friend Truman Capote in his research for the book In Cold Blood. Capote was the basis for the character Dill in To Kill A MockingBird. The novel deals with the irrationality of adult attitudes towards race and class in the Deep South of the 1930s. It was inspired by racist attitudes in her hometown of Monroeville, Alabama. She also wrote the novel Go Set a Watchman in the mid-1950s and published it in July 2015 as a sequel to Mockingbirds. She was born on April 28, 1926, in Monroeville, Alabama; her parents chose her middle name, Harper, to honor pediatrician Dr. William W. Harper, of Selma, who saved the life of her sister Louise. Her first name, Nelle, was her grandmother’s name spelled backwards and the name she used, Harper Lee being primarily her pen name. In 1949, Lee moved to New York City and took a job—first at a bookstore, then as an airline reservation agent, in order to write in her spare time. After publishing several long stories, Lee found an agent in November 1956; Maurice Crain would become a friend until his death decades later.

In the spring of 1957, 31-year-old Lee delivered the manuscript for Go Set A Watchman to send out to publishers, including the now-defunct J. B. Lippincott Company. She would later recount in a corporate history of Therese von Hohoff that she saw the manuscript as a spark of the true writer in every line of the book. She once said: I was hoping for a quick and merciful death at the hands of the reviewers, but at the same time I sort of hoped someone would like it enough to give me encouragement. I hoped for a little, as I said, but I got rather a whole lot, and in some ways this was just about as frightening as the quick, mercifulDeath I’d expected. I never expected any sort of success with Mocking bird. I never wanted to be a writer. I just wanted to write. I wanted to make a book. I didn’t want to write about race. I don’t like to talk about race, but it’s the only thing that ever comes up in my life. I want to talk to people about it. It’s the one thing that makes me feel good. I like to make people feel good about themselves. I. want to make them feel better about themselves, and I want them to know that they can do anything they want to do, even if it’s not going to be successful, that they’re going to have to work hard for it.

You want to know more about Harper Lee?

This page is based on the article Harper Lee published in Wikipedia (as of Dec. 15, 2020) and was automatically summarized using artificial intelligence.

To Kill a Mockingbird

To Kill a Mockingbird